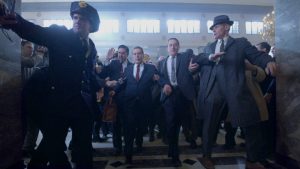 Acclaimed US filmmaker Martin Scorsese and his Sikelia Productions has inked a first-look TV and film deal with Apple.

Details of the arrangement remain scant but the multi-year agreement will see Scorsese produce and direct programming for the tech giant’s Apple TV+ streaming service.

Scorsese is currently attached to direct Apple TV+ feature Killers Of The Flower Moon, which stars Leonardo DiCaprio and Robert De Niro. It is currently in pre-production for a 2021 release.

The agreement is the latest high profile talent addition for Apple and comes just over a week since DiCaprio and his Appian Way production outfit revealed they too were linking up with the tech giant.

Scorsese is one of the most prolific directors in cinema history, behind acclaimed titles including Taxi Driver, Mean Streets, Raging Bull, Goodfellas, The Departed and The Wolf Of Wall Street. He was also behind The Irishman, the big budget mobster movie produced for rival streamer Netflix.

He joins a growing list of celebrities to sign deals with Apple, including Oprah Winfrey, Idris Elba and Alfonso Cuaron.