Almost a third of distributors believe advertising-funded (AVOD) streamers could become buyers of first window and exclusive rights to finished programming, according to the findings from a newly released survey.

The Future Of TV Program Rights In An On-Demand World report, produced by analysts at TBI sibling Omdia, found that 32% of respondents believe AVOD streamers – such as ViacomCBS-owned Pluto TV and Fox-backed Tubi – will start to buy exclusive content.

respondents – made up of content distributors from around the world – said the impact of AVOD remained unclear, while one commented that ad-focused services’ tendency for revenue-share deals were “terrible for business.”

AVOD was touted last year as one of the likely growth areas for distributors, although the Covid-19 pandemic has been cited by some as putting a potential brake on the expansion.

However, it has not stopped companies such as Roku expanding its interests in the UK and Endemol Shine Group offering premium content such as Peaky Blinders via online ad-supported services in the US and across Europe.

Elsewhere, the survey found that distributors saw the rise of on-demand streamers and an increasing trend to global rights deals as the main challenges facing their businesses. 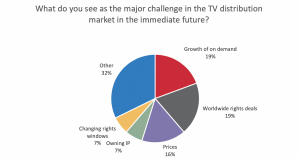 Over half (55%) expect that leading studios such as Disney and WarnerMedia will move towards a model that sees them selling none of their premium content to third parties, as their direct-to-consumer services start their global roll-outs.

Linear revenues are also expected to decline further as audiences diminish, with just under two-thirds of respondents making a majority of sales to a mixture of both online and broadcast channels.

The survey, more details of which are available via Omdia, was conducted before the global Covid-19 pandemic took hold outside Asia and these developments have not been addressed in the report.