ViacomCBS-owned MTV Entertainment’s Smithsonian Channel is collaborating with Angela Bassett and Courtney B Vance’s Bassett Vance Productions on One Thousand Years of Slavery, a new docuseries exploring the legacy of the slave trade.

Produced by Uplands Television for Smithsonian Channel in the US and Channel 5 in the UK, Bassett Vance Productions will executive produce the limited series, which will spotlight the stories of notable individuals, sharing their deeply personal Black experiences.

The series follows British-Nigerian director David Olusoga as he explores diverse histories of survival and devastation that span across the globe – from Africa to the Caribbean, London to Washington DC, and more.

Smithsonian Institute Secretary Lonnie G. Bunch III, US Senator Cory Booker, and actor David Harewood are among those notable individuals who shared their experiences, while historical documentation and insight from studied experts unfolds the chronicle of how slavery frames the present and continues to act as a distinct force on the future. 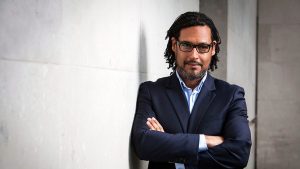 “Slavery is not that long ago. It’s really recent. It’s painfully close to us, and it’s no surprise it’s still shaping our societies,” said Olusoga. “Our aim is to break away from just seeing the slave trade as a phenomena that exists after the conquest and discovery of the New World, but to look back. It’s to set what happened in the New World in context, that it came from somewhere.”

“We are honoured to partner with Bassett Vance Productions on this long overdue landmark documentary series that reveals the untold story of human bondage on a global scale,” commented Nina L. Diaz, president of content and CCO at MTV Entertainment Group, who was appointed as head of unscripted and adult animation at Paramount+ earlier this week.

“As an executive producer on One Thousand Years of Slavery, Bassett Vance Productions wanted to tell the globally comprehensive history of slavery,“ added Bassett. “Finding the right partner and audience who share common beliefs and values was absolutely imperative as we navigate a topic that still hurts decades later.”