NENT returns to Those Who Kill

Nordic Entertainment Group (NENT Group) has commissioned a second season of its original Danish crime drama Those Who Kill, which has previously sold to the BBC and Franco-German network Arte.

The first season, which NENT said has been one of the most viewed original series on its Viaplay streaming service this year, will again be produced by Miso Film and premiere exclusively on the streamer across the Nordic region in early 2021.

The show, known locally as Den Som Dræberm, follows a psychological profiler who uncovers a pattern of horrifying murders but not her personal connection to the killer.

It has been written by Ina Bruhn (Occupied) with Per Daumiller, Tine Krull Petersen and Bo Hr. The eight episode series will be distributed internationally by Fremantle.

NENT recently appointed Filippa Wallestam as chief content officer, who in turn named a six-pronged senior exec team to oversee content, international co-productions and acquisitions for the company, as revealed by TBI earlier this month. 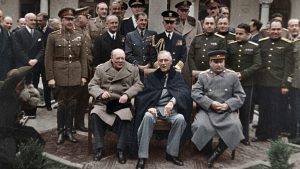 Netflix has picked up a docuseries about World War II that has been co-produced by UK prodco World Media Rights (WMR) and ZDF Enterprises (ZDFE).

Greatest Events Of World War Two In HD Colour uses unseen archive footage and rare library film from Japan and Russia to tell the story of the conflict. The streamer has taken rights to the show in 190 countries, with Alan Griffiths and David McNab exec producing for WMR.

The series is the follow-up to WMR’s World War Two In HD Colour, which was narrated by Robert Powell and sold in over 55 countries around the world. The show is a Netflix Original and is distributed by ZDFE.

US broadcaster ABC has handed out full season orders to scripted trio Stumptown, Mixed-ish and The Rookie.

The latter will extend its run by seven episodes while Mixed-ish is to deliver a further nine episodes. A decision on Stumptown‘s extension has not yet been made.

Stumptown and Mixed-ish are from ABC Studios while The Rookie is co-produced with Entertainment One.