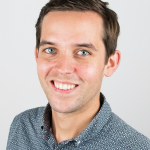 The exec will take on the newly created role of head of acquisitions and coproductions at TCB, which has been staffing up significantly in the past year.

Humphreys will report to Paul Heaney, founder and CEO of TCB, and work closely with acquisitions and coproductions executive Claire Runham.

Humphreys, meanwhile, has spent 18 months year at London-based Passion, where he was the company’s first head of acquisitions.

Before that, he had spent three years as VP of sales and acquisitions at Banijay International, which was subsumed into the Banijay Rights operation.

He has also worked for Endemol Shine Group and FremantleMedia.

“At TCB, we don’t just sell shows – we help conceive, finance and develop them, working closely with our producer-partners every step of the way,” said Heaney. “Jimmy is one of the few people who truly gets this ‘new world’ of distribution, and is capable of spreading the word in his own way.

“He’s a rising star but he’s already achieved a huge amount, as his track record at Passion Distribution demonstrates. I’m confident he’ll fit right in with the TCB culture.”

Humphreys said he would target bringing new production companies, “both established and upcoming”, to TCB’s roster of clients.