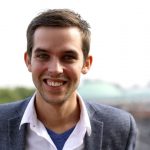 The exec will become head of acquisitions at the Tinopolis Group-owned sales outfit on August 1.

Reporting to Namiech, who succeeded Sally Miles as Passion chief executive earlier this year, Humphrey (pictured) will oversee the development, acquisition and distribution roll out of Passion’s programming.

He and Namiech were among the executives who left Banijay Group’s sales arm after it merged with Zodiak Media. TBI revealed his departure, along with the news various others were set to exit, in March.

“I’m absolutely delighted at the prospect of working with Jimmy again and to add him to the talented Passion Distribution team,” said Namiech. “Jimmy brings solid experience across different programming genres, has hands-on global market knowledge and a great understanding of both creative and commercial opportunities.

“He will be instrumental in continuing Passion Distribution’s first-class relationships with leading independent producers around the world.”

Humphrey said he planned to “forge new relationships with producers and broadcasters all over the world to bring fresh, unique content into Passion’s already diverse catalogue”.