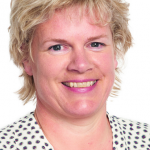 The agreement follows a prior distribution relationship between the two companies, and includes an option for a phased increase in ownership by BBCWW in the coming years.

The team have since produced titles such as The Durrells for ITV, SS-GB for the BBC and the soon to be released Killing Eve for BBC America.

Sid Gentle was founded by Sally Woodward Gentle, who has previously helped to create hit shows such as Any Human Heart, Whitechapel and Enid, starring Helena Bonham-Carter.

Helen Jackson (pictured), BBC Worldwide’s outgoing managing director of content, added: “We have enjoyed working with Sally and her team immensely over the past three years and this is a great opportunity to build on our partnership.

“Sid Gentle has already delivered several much-loved dramas and we are super excited by what we have seen so far of their latest – Killing Eve. They represent perfectly the creative vibrancy that is British drama right now”.

Woodward Gentle said: “We couldn’t be more delighted to be joining forces with BBC Worldwide. Their respect for our independence coupled with their extraordinary industry links and sales ability is really exciting.

“Sid has built a reputation working with extraordinary talent and developing projects we believe in and it is very exciting to further our ambitions to create and deliver impactful drama. We have enjoyed working with BBC Worldwide in the past so can’t wait for this new phase in Sid’s life.”