Tech & Analysis: How US streamers are doubling down on Spanish-language shows

US-based streamers are doubling-down on Spanish-language content and making significant investments over recent years. Ahead of Content Americas, Mark Layton tracks developments via exclusive findings from our research partner, Omdia.

Spanish-language TV content was relatively under-represented on the major US OTT video services back in 2020 but this is beginning to change – and fast.

Fox-owned Tubi has become the clear leader among non-Spanish language-focused Stateside streamers in this space, going from 1,665 hours in March 2020 to 9,455 by September 2022. 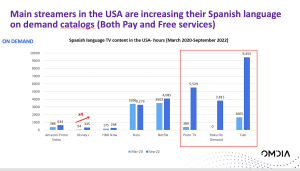 It is not the only one. Paramount’s ad-supported Pluto TV has jumped from 389 hours to 5,529 hours over the same period, while Roku’s on demand offering has gone from no hours at all to 3,815.

The findings, which will be presented by Maria Rua Aguete, Omdia’s senior research director for media & entertainment, at Content Americas in Miami tomorrow, highlight how almost all streamers have been ramping up Spanish-language programming to expand audiences.

And while the overall number of hours was smaller, Disney+ made a four-fold increase, from 64 hours in March 2020 to 335 hours in September 2020, although Disney’s part-owned US-only service Hulu actually took a step backwards in the same period, dropping from 3,396 to 3,273 hours.

Unsurprisingly, all are still straggling behind TelevisaUnivision’s recently launched ViX service, which was rolled out last year and brought together Televisa and Univision’s previous streaming brands including PrendeTV, Blim TV and the VIX AVOD service – acquired by Univision in 2021.

The Spanish-language focused streamer currently boasts 31,788 hours of Spanish-language content, representing 79% of its total catalogue, including titles such as María Felix: La Doña, based on the true story of the beloved actress and singer, La Mujer del Diablo, about an elementary school teacher with dreams of leaving her town to pursue a tourism career.

US streamers are not just acquiring content either, as there has also been a rapid boom in the commissioning of original Latin American content in recent years.