A nice view can take you a long way in the streaming world. The majestic Great Plains of the early 18th century and the sunny climes of modern-day Santa Barbara may seem worlds apart but do have one thing in common – both have pulled in record breaking numbers for US streamers Hulu and Peacock.

At least, that’s what they tell us.

The historical horror, about an extra-terrestrial on the hunt for Comanche warrior Amber Midthunder, beat out previous record holder The Kardashians, which Hulu previously revealed as its biggest TV series premiere in April.

The US remake of the ITV Studios format, tracking a group of “glamorous singles” on the hunt for love while living together in a beautiful villa, has also had the third largest original launch overall on the streaming platform since its debut on 19 July, according to NBCUniversal-owned Peacock.

You couldn’t ask for two more different titles, yet both have helped their respective streamers in a hunt of a very different kind ­– that of subscriber retention.

While both Hulu and Peacock are quick to proclaim these shows as record breakers, they don’t actually provide any audience numbers, leaving us to speculate as to what that really means.

Without figures to compare or contrast against, we’re largely left in the dark about how these popular titles are stacking up against their competitors on streaming and linear networks alike. 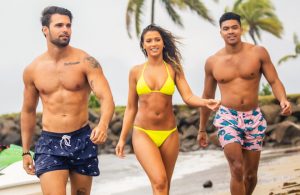 Prey, in particular, immediately became a critical darling and would have been a likely contender for a summer blockbuster if it had been given the chance of a theatrical release where some solid box office figures could have been attached.

What these proclamations do grant current and potential subscribers, however, is hype, and either a reminder to keep on subscribing or to sign up for access to the content.

Netflix is the only major streamer to publish its viewing figures and the lack of transparency from other services can be frustrating even to those at the top of the production chain.

Joining the clamour for more insight just this week was Hollywood star Ben Stiller, who revealed that he hasn’t been able to see detailed viewing figures for hit Apple TV+ series Severance, which he directs.

Stiller said that despite the show’s critical success, he still has no idea how many people have actually watched it.

“They sort of give you kind of an idea. But it’s not like ratings or box office numbers or anything like that. It’s like graphs and charts that are relative,” said Stiller.

“They don’t tell you the numbers. It’s really weird. So, you get these graphs and charts, like I said, that have like peaks and valleys. But you don’t know what the baseline is. I guess [it] could be like, based on 100 people or could be like, 200 million people. We don’t know. They basically say, ‘Yeah, this is doing well.’ You’re trying to interpret what they’re saying. But they’re straightforward. It’s just that’s how, I guess, all the streamers do it.”

But if, as Stiller points out, all major streamers (bar Netflix) are set to keep these numbers to themselves for the foreseeable future, then perhaps we should stop viewing these broken records as any metric of success.

And after all, critical praise and reports of decent, but unknown, audience figures have never guaranteed a lengthy lifespan for a show on a streaming service where the algorithm is king and what’s hot is mercurial.

If a show bleeds, they can kill it.