David Zaslav does not believe that the merged Warner Bros. Discovery needs to outspend rivals such as Netflix and Disney on content in order to remain competitive.

“Our goal is to compete with the leading streaming services, not to win the spending war,” said the Discovery president and CEO on an investor call yesterday, following the company’s latest earnings report, with the company posting Q4 revenues of $3.2bn, up 10-11%, excluding currency movements.

Zaslav, who will lead the combined entity, shared his doubts that more original content would necessarily translate to increased revenue.

“If you look at what Casey [Bloys, HBO & HBO Max CCO] is doing with HBO. So he has Euphoria right now, he just had Succession, he has the period drama, The Gilded Age going right now. Would HBO be doing a lot better if it had three more really successful scripted series at this moment? It’s not clear that they would be,” said Zaslav.

“We want to compete against Disney and Netflix, but we are very different. Disney has a group of people across the world that absolutely love their product. Netflix has a very broad appeal product.”

Zaslav instead described Discovery’s offering as “nourishment” and Warner’s content as “shock and awe,” suggesting that the combination was “a really compelling menu.” 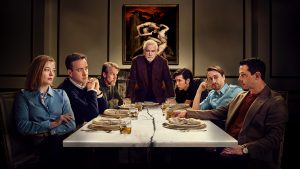 The wide-ranging call, which also touched on the impact that Russia’s invasion of Ukraine could have on Discovery’s business in the region (CFO Gunnar Wiedenfels said any potential financial impact would be an “immaterial proportion”), also saw Zaslav address Wall Street concerns about the streaming business model.

Zaslav made it clear to investors that the combined business will not be solely focused on an SVOD model.

“I think there are a number of players that are very tied to this idea of subscription only,” he said, explaining that the streaming strategy will feature three “funnels.”

“Ultimately you could see a subscription-only service, an ad-light service and then a free digital service that everybody can go to,” said Zaslav.

The Discovery exec said that the free digital service would come last, explaining: “It’ll have very different content than the subscription or ad-light, but there will be people that do not want to pay and they’ll want to watch content. And who has more content than Warner Bros Discovery? Figuring out how to do that will be one of the strategic initiatives.”

The $43bn merger between AT&T-owned WarnerMedia and Discovery cleared US antitrust legislation earlier this month, paving the way for the deal to be completed by the close of Q2.

Zaslav is set to move to LA to run the giant entity, but little detail has yet been revealed on the exec set-up while the merger progressed through regulatory proceedings.

WarnerMedia and Discovery first revealed the shock-merger in May last year, subsequently confirming that the enlarged outfit would be known as Warner Bros. Discovery.

It will own one of the deepest libraries in the world with nearly 200,000 hours of programming and will also house both recently launched streamers HBO Max and Discovery+.