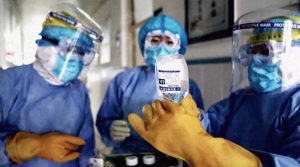 Current affairs special Coronavirus: The Silent Killer (1 x 48-minutes) investigates the origins and global spread of the virus and assesses the Chinese government’s response to the outbreak.

The second special, Coronavirus: Race Against The Pandemic (1 x 48-minutes), will feature health experts and high-end graphics as it breaks down the latest scientific developments in the fight against COVID-19.

The Story Of The Songs will be produced in partnership with Paramount Network UK and each episode will focus on a different global music legend, from Aretha Franklin to Madonna and Metallica.

The series is based on the one-off 90-minute VIS UK-produced title ABBA: Secrets Of Their Greatest Hits, which aired on Channel 5 in October, and has also been acquired by Reelz US to air on its network this year.

Jill Offman, MD at VIS UK commented: “We are very excited by this opportunity to delve into the stories of these beloved classics that have formed the soundtracks of so many of our lives.”

The new show will air on Reelz US and Paramount Network UK later this year with VIS Content Sales distributing the show internationally.

The Secret History Of World War II is a 6 x 60-minute series produced by Woodcut Media for UK broadcaster Channel 5, exploring the “hidden stories” of the war.

Life 2.0 is an 11 x 22-minute series, produced by Steve Rotfeld Productions for Fox in the US. The factual science title dives into topics such as human life extension, the rise of ‘cyborgism’ and the impact of virtual reality.

Finally, How Factories Changed The World is a 5 x 50-minute series exploring the rise of the factory over the ages. It was produced by Wildbear Entertainment for NTV in Germany.

Blue Ant International has taken over distribution for more than 70 hours of programming from its global natural history and factual production house, NHNZ.

UKTV-owned network W has commissioned two news seasons of Inside The Ambulance.

This will be the 11th and 12th runs of the observational documentary series that is produced by Brown Bob Productions and uses GoPro cameras mounted inside an ambulance to follow the work of first responders.

Inside The Ambulance, whose 10th season debuts on W in May, is among a host of new UKTV originals for W this year. Others include The Wedding Fixer and the two-part special, Emma Willis: Special Births.