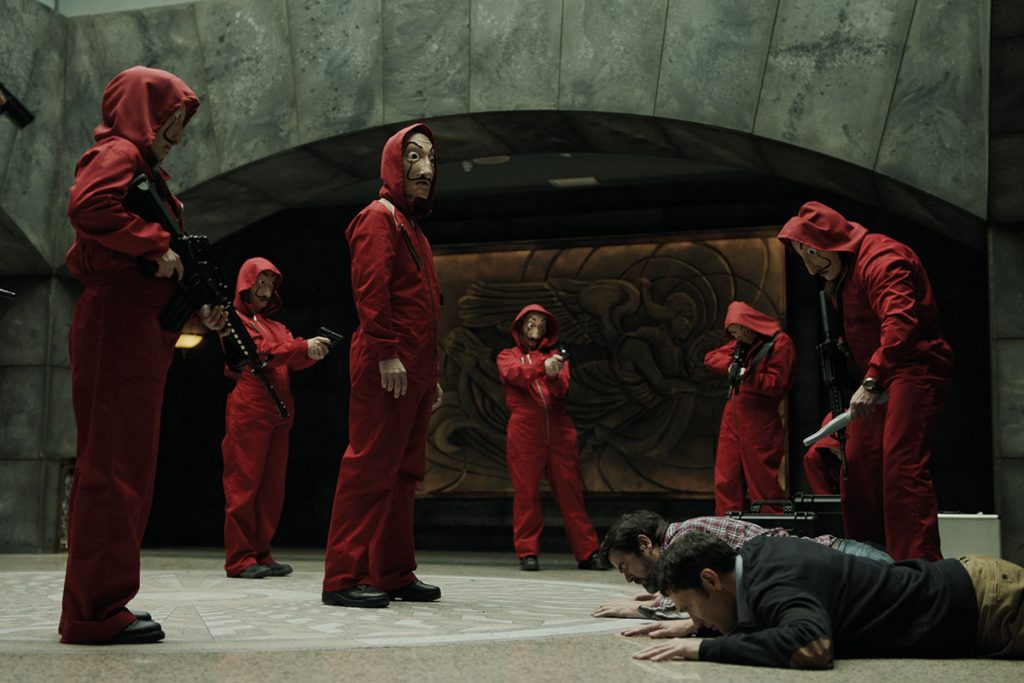 As NATPE delegates arrive in Miami, Fateha Begum, associate director at TBI sibling IHS Markit Technology, explores how Netflix has changed its tactics in the battle for Latinx and Hispanic subscribers.

Global OTT video subscriptions are set to exceed one billion in 2021, a figure only recently passed by traditional pay TV in 2017.

In the US, a market affected by high pay TV churn, OTT subscriptions overtook pay TV in 2016 and by year-end 2023 IHS Markit Technology expects there to be four times as many OTT subscriptions as pay TV. With greater choice and flexibility for consumers, allowing better movement between services, customer retention becomes a key challenge for video services.

Consumer surveys conducted by IHS Markit Technology in November reveal one in five US households cancelled a video service over a 12-month period and did not return, driven primarily by price and a lack of content. Concurrently, nearly 30% of OTT subscribers signed up to at least one new OTT service in the same period. Consumers are also cancelling and re-subscribing to video services to watch new seasons of content.

The shift is more dramatic when looking at Hispanic/Latinx audiences in the US, as Netflix grew in popularity for the group and Amazon Prime Video saw a decline in penetration. 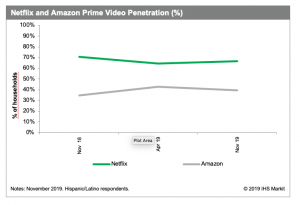 The two services grew their US paid video subscriber bases in 2019 and are expected to continue doing so, despite new entrants in the OTT space. Netflix and Prime Video penetration among all US households remained relatively stable throughout the course of the year. However, among Hispanic/Latinx respondents, Netflix penetration saw a prominent fall between November 2018 and April 2019, which it successfully reversed in the subsequent six months albeit not to previous levels.

The reverse is true for Prime Video, which saw an uplift in penetration in April, followed by a decline. Hispanic/Latinx Netflix subscribers were more likely to have signed up to the service less than a year ago, with one in five of these respondents citing ‘local content’ as a reason to subscribe.

Hispanic/Latinos are twice as likely to cancel and re-subscribe to a service and 50% more likely to use a free trial only than the average consumer. Prime Video was the most cancelled video service among Hispanic/Latinos, while Netflix took the top spot among all respondents. The picture was very different to a year prior, when Prime Video was nearly equally as likely to be selected as a subscription driver to Amazon Prime as ‘discounted/quicker delivery’ among Hispanics/Latinos, whereas delivery benefits take the lead by 16% among all respondents. 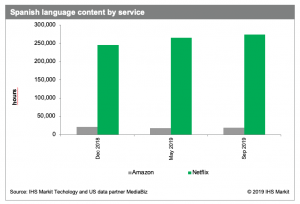 The movement to Netflix and from Amazon is in line with the two services’ investment in Spanish language content. Both video platforms boast vast content libraries, although Amazon takes the lead with nearly 3.4m hours of content overall according to IHS Markit Technology and its US data partner. In terms of Spanish language content however, Netflix has nearly 15 times the amount of content in hours compared to Amazon Prime Video and is a clear leader in the US streaming market, followed by Hulu.

Netflix’s investment in Spanish content has increased considerably in the past years as the global video service seeks to increase its subscriber base globally following a plateau in its US subscriptions. Nearly 14% of Netflix’s catalogue comprised of Spanish-language content in September 2019, with the number of hours increasing by 12% when compared to year-end 2018. Netflix’s foreign language originals such as Money Heist (aka La Casa De Papel) have seen success globally and will reap benefits for the streamer in three key markets – Latin America, the US and in Europe, where content quotas are being imposed requiring European content to make up 30% of libraries.

\While Netflix increased its Spanish-language content by nearly 30,000 hours between December 2018 and September 2019, Amazon saw a decline of 2,000 hours – with the majority of change occurring in the first half of the year for both video services and therefore mirroring the trend in penetration among Hispanic/Latinx respondents.

Content clearly plays a role in the longevity of online video services, particularly as consumers can now choose from a plethora of offerings. Hispanic/Latinx audiences in the consumer survey reinforce the importance of content in the acquisition and retention of consumers.

However, the on-demand nature of uptake sees a higher degree of flexibility for consumers, which must also be reflected in device distribution.

This plays a key role in subscription choices for Hispanic/Latinx audiences: they are more likely than the average consumer to select ‘a wider range of devices’, ‘to watch on a specific device’ and ‘concurrent streams’. While connected devices penetration tends to be marginally lower in Hispanic/Latinx homes, the demand for device accessibility likely stems from larger family sizes, as they are more likely to live in households with four or more people.

Fateha Begum is associate director for connected devices & media at IHS Markit, part of the Informa Tech division that is also home to TBI.