Facebook’s Patrick Walker: Less about ‘You’ and more about ‘Us’ 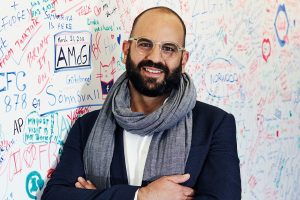 You may remember in 2006 when ‘You’ was named Person of the Year by Time magazine for “seizing the reigns of global media and beating the pros at their own game”. This was a milestone within the media industry, recognising the millions of people who contribute to user-generated content around the world – through online video or otherwise.

But this was a singular ‘You’ – hailed as an ‘individual’ going online to “watch. And work. Like crazy. Making Facebook profiles and Second Life avatars”.

Fast-forward 13 years. Through the surge of viral one-off hits from individual uploaders such as Numa Numa Guy or Charlie Bit My Finger, and the creativity of short-form video hits from digital-first brands such as Vice and Buzzfeed, what’s been born is a more strategic, TV-minded approach to online video, with an entire community of people at its core.

At Facebook, we were invigorated by this social video concept – where viewing has become less about ‘You’ and more of a participatory experience.

We launched Facebook Watch internationally last year as a dedicated platform for content, allowing us to test and learn what our users want to get out of online video around the world. What we’ve seen is that our viewers are lively when content is centered around conversation – we’ve seen audiences on our platform come together to watch video through tools such as Watch Party, and even become stars themselves in gamified or ‘Live-with’ formats, bringing users even closer to their favourite creators.

We’ve invested in social series that thrive on interaction, such as scripted teen drama Skam or talk-show format Red Table Talk, which saw 800,000 interactions in the form of likes, comments, reactions and shares in just the first 72 hours of the last episode landing on Watch.

We’ve invested in social series that thrive on this concept of interaction, such as scripted teen drama Skam or talk-show format Red Table Talk starring Jada Pinkett Smith, which saw 800,000 interactions in the form of likes, comments, reactions and shares in just the first 72 hours of the last episode landing on Watch.

Likewise, our ecosystem partners are learning from their own social practices on the platform and experimenting with formats in the same vein.

Take Italian digital publisher Freeda, which produces inspiring original content for their Facebook video page, including a series entitled Freeda For The Record, focused on interviews with iconic women on topical issues, and sparking meaningful conversation among the network’s 1.6m followers.

What’s interesting is that this new social rule doesn’t just apply to new formats. Old fan-favourites are finding new lifespans on social media, and are being re-invented online to draw in new communities and nostalgic conversation.

We’ll soon launch our version of MTV’s The Real World on Watch in Mexico, Thailand and the US, this time empowering the Facebook community to vote via poll on one of the cast members. We’re also putting classic library content from three previous series of MTV’s The Real World on Facebook Watch, and users will have a chance to vote on which nostalgia series will be available.

And our partners are now empowered to do exactly the same – leveraging their own back-catalogue of content on Facebook Watch for brand-new distribution, while monetising through our Ad Breaks programme. Take Little Dot, who are uploading classic episodes of Ramsay’s Kitchen Nightmares, reaching millions of new viewers, or Endemol’s Mr. Bean, whose video page has more than 82m followers and sees some of the highest watched episodes in the UK.

While traditional TV commissioning strategies remain a key part of video distribution, across the industry there’s now huge potential across digital mediums to be the gatekeeper of your own content, and rally new, talkative fan-bases online.

If 2006 was the power of ‘You’ in the media and entertainment industry, then 2019 is all about ‘Us’ – working closely together to define a new vision for social video.

Patrick Walker is director of media partnerships for EMEA at Facebook