US research firm The Diffusion Group (TDG) has published TV and video projections for the coming year, in which it sounded a note of caution about the near-term prospects of VR. 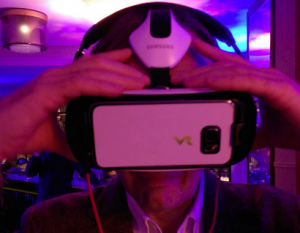 TDG said its consistent view is that VR will “take a long time to gestate among gamers and other early adopters before it’s ready for primetime”, claiming that the use of VR at the Super Bowl and the Olympics will be nothing more than a “‘cool demo’ sideshow”.

However, it added: “VR naysayers need to be careful, as standalone VR headsets [i.e., no PC or smartphone required] are likely to hit the market in 2018, paving the way for low-cost VR gaming that will eventually create a sustainable VR ecosystem that includes video content.”

Announcing findings from its forthcoming ‘US Consumer Technology Sales and Forecasts’ report, the CTA said that it expects VR and AR headsets and eyewear to sell 4.9 million units in the US in 2018, up more than 25% compared to 2017.

Releasing the stats ahead of next week’s Consumer Electronics Show (CES), the CTA said that it expects VR/AR headset revenues in the US to reach US$1.2 billion this year and predicted consumer-focused AR eyewear will “accelerate considerably” in the next five years.

It also said that the VR/AR sector would account for a record amount of exhibition space at CES this year, with the square footage of the AR Marketplace up 10% this year and the Gaming and VR Marketplace bigger by 18%.

“We’re thrilled with the impressive growth of AR/VR, reflecting that the sky is the limit with these emerging technologies,” said Karen Chupka, senior of CES and corporate business strategy at CTA.

The CTA’s AR/VR Working Group is soon due to complete its work on technical definitions, designed to provide support for future projects and address best practices for the likes of mixed reality (MR), outside-in tracking and six degrees of freedom or ‘6DoF’.

“It’s up to us in the industry to help consumers understand all the technology and content available right now in the AR/VR/MR space,” said Mark Turner, chairman of the CTA’s AR/VR working group and VP of corporate partnerships and strategy at Technicolor.