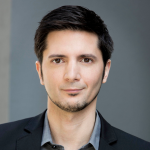 He has been appointed VP of sales for the Americas at the distribution arm of the 21st Century Fox studio arm.

At eOne, he was head of sales for the US and Latin America, a role that saw him led distribution those territories across TV, digital and mobile.

His new post will be similar, with Sabella involved in pay TV and SVOD sales efforts in the US, and television deals in Latin America and Canada.

Sabella will be based in LA, reporting TCFTD executive VP of the Americas Evan Scheffel, who said the new exec’s “experience across the U.S. and Latin America perfectly aligns with our efforts to expand our business in these key markets”.

Last year, long-serving TCFTD president Marion Edwards retired with Gina Brogi replacing her and subsequently triggering a restructure that put Scheffel in charge of the Americas.