Social media giant TikTok will attract more than two thirds of online video advertising revenue by 2027, more than both Meta and YouTube combined.

The findings, which were revealed today by research powerhouse Omdia at the Media & Entertainment Leaders Summit (MELS) here in London, showed that 37% of all online video ads would come from the Byte Dance-owned app.

Meta and YouTube, meanwhile, are predicted to take just 12% each, while SVOD market leader Netflix will take only 2%. 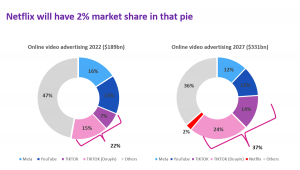 Last month, TikTok leapfrogged Netflix to become the second most popular app in the US, with only YouTube retaining the crown for under 35s viewing, according to Omdia

Speaking today at MELS, Maria Rua Aguete, senior director at Omdia, said that online video advertising is predicted to generate more than $331bn in the next five years, with the short-form video hosting service taking the biggest slice of that pie.

In the US, TikTok has already already overtaken other social media platforms as the place to watch video content, with the service’s rapid growth making it an appealing platform for advertisers seeking to reach wide audiences.

In particular, the platform appeals to young consumers, which is a highly sought after demographic by advertisers and has proved hard to reach via other channels such as traditional linear TV and other social networks, like Facebook.

“Advertisers are moving away from Meta and YouTube towards TikTok,” said Aguete at MELS. “Advertisers want to reach the followers that TikTok has.”

MELS, which is being produced by Informa’s TBI, DTVE and Omdia is taking place today with companies including TikTok, Roku, Banijay, Sky Studios and STARZPLAY taking part in discussions around the future of content creation and distribution.