Sister to adapt Abi Morgan’s ‘This is Not a Pity Memoir’, with author attached to direct 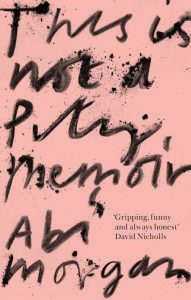 This Is Not a Pity Memoir

This Is Going To Hurt producer Sister has optioned the rights to adapt This is Not a Pity Memoir, the novel written by The Split scribe Abi Morgan that tracks recent life-changing events in her family.

The author will adapt the book for screen and is also confirmed to direct and executive produce, with Sister co-founder & chief creative officer Jane Featherstone (Landscapers) also attached.

Morgan’s label Little Chick is co-producing, with the novel published in the UK by John Murray and in the US by Sugar 24, an imprint of HarperCollins. Global rights are handled by 42.

The memoir follows Morgan’s recent family life, which saw her partner put into a coma and she herself diagnosed with breast cancer.

Sister described the novel as “profoundly powerful and perceptive,” adding: “Morgan writes about love, grief and the eternal promise of hope. It’s a reminder that, even in the worst times, there is light ahead.”

Morgan said: “Working with Jane and Sister over the last few tumultuous years, they have been my running partners, given a unique birds eye view on the unfolding drama. As producers of some of the best film and television out there, there is no one else I would trust to help bring the deeply personal This is Not a Pity Memoir to the screen.”

Featherstone added: “Abi has such an extraordinary gift for words, so while it should be absolutely no surprise that her memoir is such a beautiful and powerful book, it still stunned me.

“We’ve worked together for many years but her incredible strength in these last few, very challenging ones, has been deeply inspirational. I feel truly privileged to be able to work with her to bring this very personal story to the screen.”