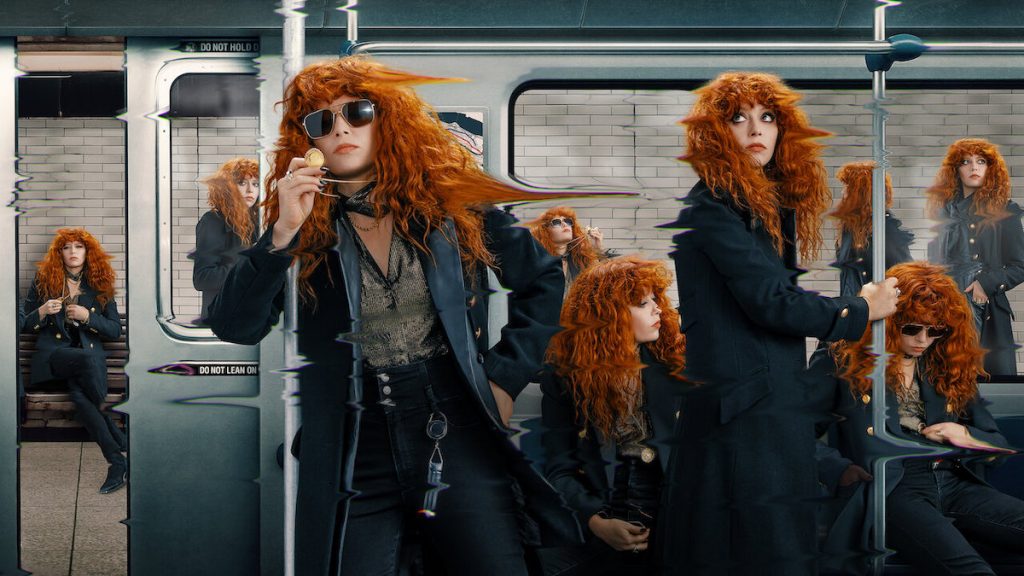 Netflix’s personalized homepage may drive viewership, but more and more people are looking beyond online video apps and pay-TV platforms to decide what to watch, with major implications for how providers compete, writes Omdia’s Rob Gallagher.

In 2016, two Netflix executives published an academic paper asserting that personalization and recommendations saved the company more than $1bn per year. Subscribers that quickly find shows or movies to watch are less likely to cancel their subscriptions, the argument ran.

Since then, consumers’ appetite for online video has grown, but so has churn. In November 2021, 82% of US internet users subscribed to one or more services, according to Omdia’s survey. Those with three or more services were 25% more likely to have cancelled a subscription over the previous 12 months than those subscribed to just one. Those with five-plus were 55% more likely. 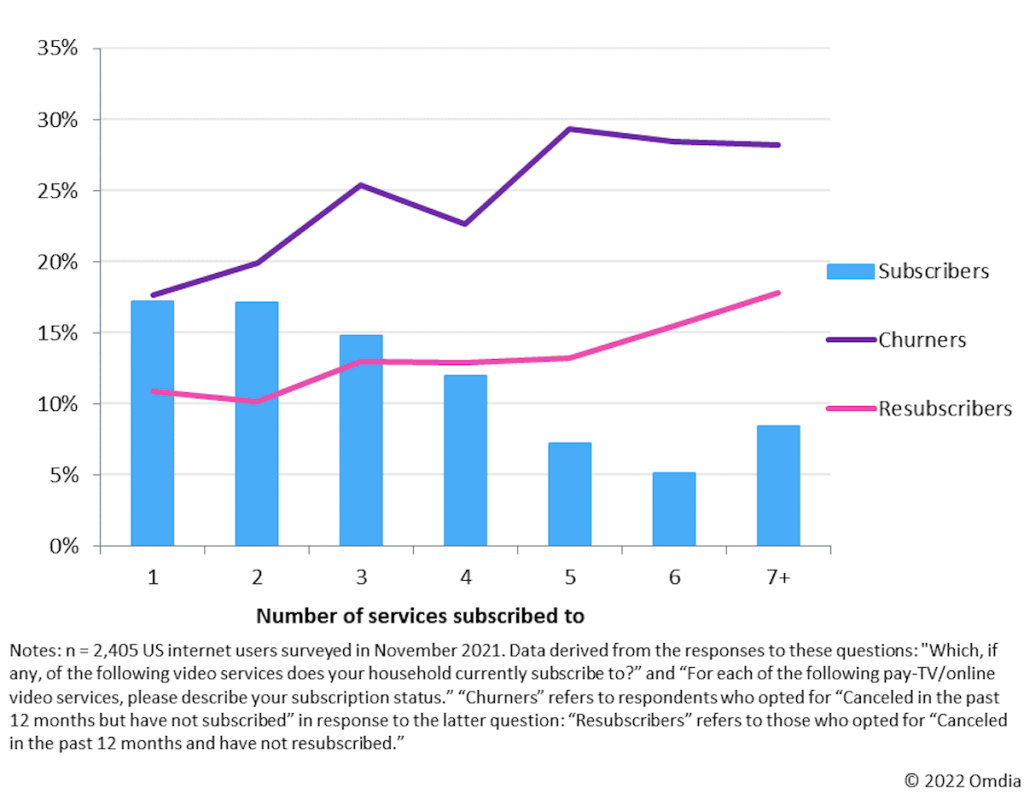 US, percentage of internet users and churn and resubscribe rates by number of online video services subscribed to, November 2021

This seems partly due to cost. Those monthly fees add up, and factors related to affordability were cited as the main reason for cancelling by 65% of churners.

But it’s also due to limits on a more finite resource: the time people have to watch TV. Our research shows that US subscribers say they access newer services such as Apple TV+, Disney+, and Peacock Premium less frequently than the well-established Netflix and Hulu. The exception is Amazon Prime Video, which can afford to take a more relaxed approach to engagement given the pull free shipping adds to its service.

Engagement with newer services has also fallen as competition has intensified. For example, about 87% of US Disney+ subscribers said they watched the service at least once a week shortly after the service launched in November 2019. Two years later, that figure was just 64%.

Some may object that what people say can differ from their actions, but I contend that perception is reality: if someone feels they don’t watch a service enough, real data might not stop them from cancelling.

Driving daily viewing will be a major challenge for all apps

That Netflix’s weekly active users have averaged at a market-leading 85% of its US subscriber base for the last three years speaks to the power of the experience it has created. But its daily active user numbers tell a different story.

Again, they’ve averaged at a market-leading 41% of its US base for the past three years, only being narrowly eclipsed by those of Hulu in November 2021. Impressive, but given that many people in the US watch some form of TV or online video every day, that suggests around three out of five of Netflix subscribers are regularly turning to other sources. 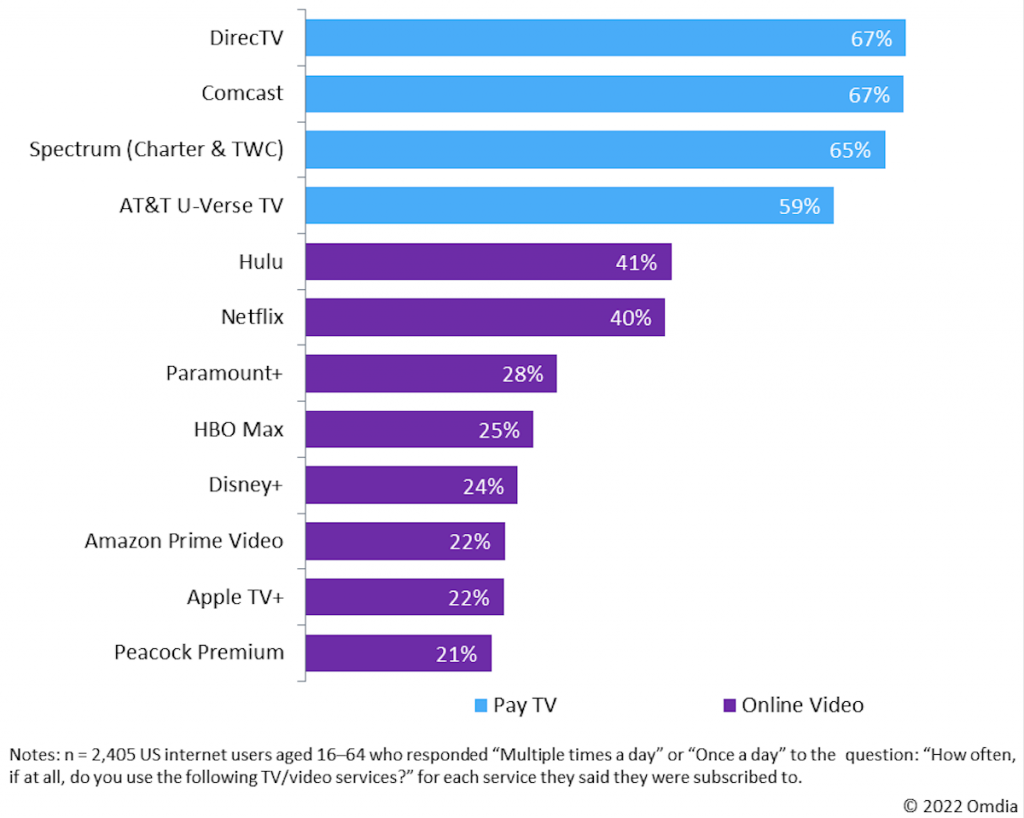 Partnerships to make online video services available via pay-TV platforms offer one counter. Two out of three subscribers to US operators DirecTV, Comcast, and Spectrum say they access those services every day, making their platforms a potentially powerful way to get third-party video apps in front of viewers.

Given the potential of such partnerships and personalization systems like Netflix’s to drive viewing, Omdia sees content aggregation and discovery as a bright spot in the TV and video technology market, with annual vendor revenue forecast to rise 10% over 2021–25 to near $1.5bn dollars.

But that still leaves one major challenge: a growing number of people are turning to other methods to choose what to watch.

In November 2018, 62% of US viewers said their decisions were influenced mostly by various features of their TV and online video services. By November 2021, that figure had shrunk to 54% as recommendations from friends, family, and social media and searching online grew in popularity. The drop was sharpest among 18–34-year-olds, falling to less than half of that coveted demographic.

This shift was inevitable and will be long-lasting. Despite promises by industry titans such as Apple and Sky, the unbundling of TV into apps begun by YouTube and Netflix means no single service offers access to “all your TV in one place”—nor will they for the foreseeable future. The “tyranny of choice” caused by the sheer volume of content also means consumers will value trusted reviews and word-of-mouth recommendations more and more. 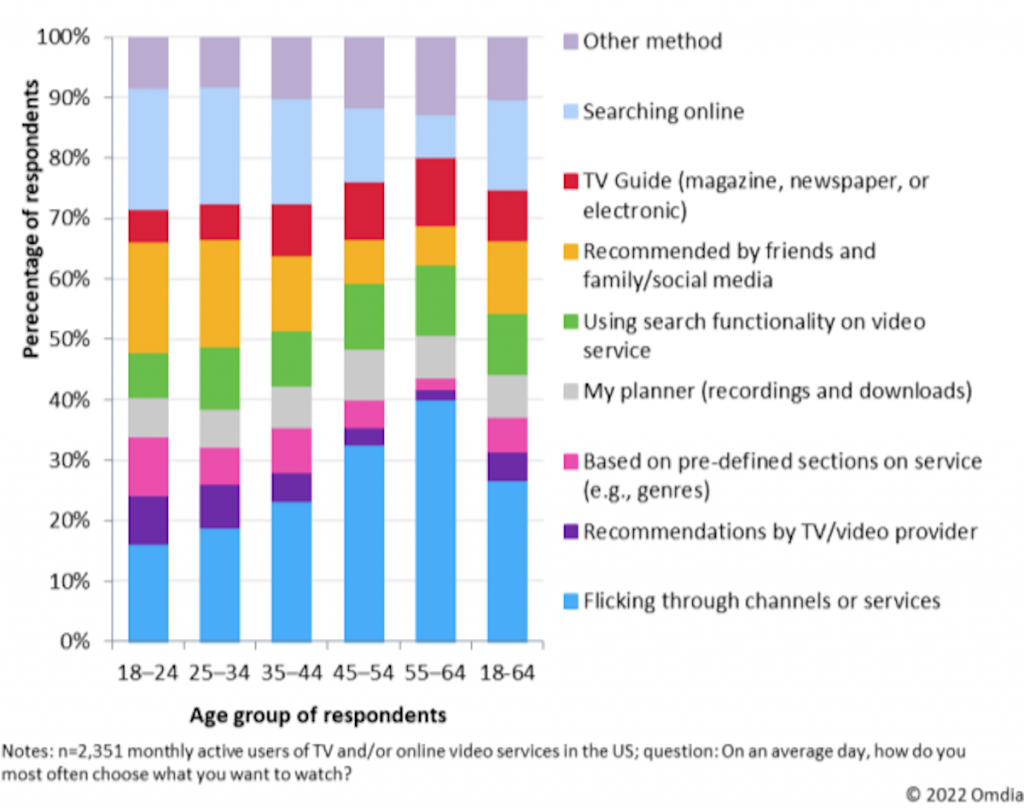 How US TV and video users say they choose what to watch, November 2021

Online video providers need to turn the wider world into their content discovery engines, by investing heavily in advertising, marketing, and PR to create buzz about their TV shows and movies outside their apps and pay-TV partners’ platforms.

The smartest strategies will merge the two, with in-app recommendations reflecting subscribers’ wider interests and conversations. It’s likely that people’s viewing decisions will be increasingly influenced in multiple ways. An app notification about a new show on subscribers’ phones might prompt a conversation with friends who have already seen it, based on positive press reviews, for example.

Again, Netflix is ahead of the curve, investing billions of dollars in marketing to acquire new subscribers and keep existing ones engaged with its shows and movies. But “old media” firms have a crucial advantage: numerous brands that have lived large in the public imagination across more media and for longer — many of which they’ve just wrenched back from Netflix.

In other words, this popularity contest has only just begun.

Rob Gallagher is VP of research for media & entertainment at global research powerhouse Omdia. Like TBI, Omdia is part of Informa. For more in-depth data and analysis of content strategies, click here.