The Masked Singer has held onto its crown as the world’s best-selling format for a third consecutive year, according to K7 Media’s annual report on the top 100 travelling unscripted TV formats, Tracking The Giants.

The musical entertainment format from South Korea, which is distributed by MBC & Fremantle, secured 12 new local adaptations in 2021, including with Amazon in Japan, TV4 in Denmark and TVN in Poland.

The Masked Singer, which first debuted in 2015, also has the most active format adaptations around the globe, with 41 versions currently running (followed by The Voice and Who Wants To Be A Millionaire, with 38 and 35, respectively).

However, UK-based research firm K7 noted that new sales of the format have slowed considerably from a high of 23 markets in 2020 as it now reaches global maturity.

The show was one of nine formats to achieve at least five new local versions in 2021, followed by Sony Pictures Television’s evergreen quiz format Who Wants To Be A Millionaire, with nine sales, and Fremantle’s Game Of Talents, with seven sales. 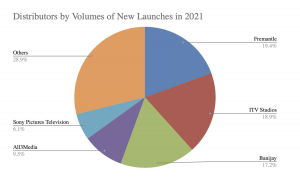 K7 named Game Of Talents as its Format of the Year, which it said was the “fastest moving” format of the year, having “gone from a standing start in 2020 to an impressive seven new markets in 2021.” Launched on Spanish FTA channel Cuatro in 2019, the format has since been sold to broadcasters including Fox in the US, ITV in the UK, TV8 in Italy and TF1 in France.

Its distributor, Fremantle, was meanwhile named Distributor of the Year, by K7, with the firm claiming the largest individual volume of new format sales in 2021, with 80 launches amounting to 19.4% of the global total.

“The battle for distributor of the year turned into a closely fought battle between just three major players – Banijay, Fremantle and ITV Studios,” said K7. “In what turned out to be a tight finish, worthy of the best talent show finale, it was ultimately Fremantle who prevailed for a third year running, delivering a total of 80 new launches in 2021.”

ITV Studios followed closely behind with 78 new launches, while Banijay claimed third place with 71 new launches for the year. 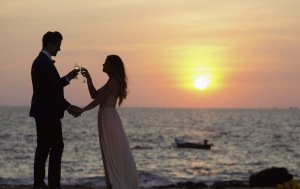 Challenge-based game shows, such as The Masked Singer and I Can See Your Voice, replaced quiz shows as the best-selling format sub-genre in 2021, according to the report. The other dominant sub-genres for the year were talent and dating & relationships.

“A popular theory for this suggests that during lockdown, viewers had enough of ‘real-life’ in their everyday lives and looked for more relaxing entertainment to unwind to on TV,” suggested K7.

The UK, meanwhile, remained the biggest exporter of formats overall, making up 40% of the total in 2021, but it was the US that claimed K7’s title as Market of the Year, registering growth of more than 50% in the number of originated formats last year.

K7 noted: “When you look at the list of US-originated format movers, it becomes clear that part of the reason for this growth is that many of the most successful classic quiz and game show formats originally came from the USA, and demand for them has risen over the past two years.”

Sales of evergreen favourites including Match Game, Family Feud, Hollywood Squares and Name That Tune all rose in 2021, while US-originated reality formats were also in high demand, with Banijay notching up new sales for Temptation Island, while Warner Bros. secured buyers for both The Bachelor and The Bachelorette.

Douglas Wood, who authored the Tracking The Giants report, said that despite the pandemic, the format market had weathered the storm. He commented: “We should pause to celebrate the resilience and ongoing success of the unscripted global format market.

“With many scripted series experiencing production disruptions over the past year, non-scripted content has seen a revival in its fortunes, and we have witnessed an increased demand for reliable formats that can be turned around in a relatively short period of time.”