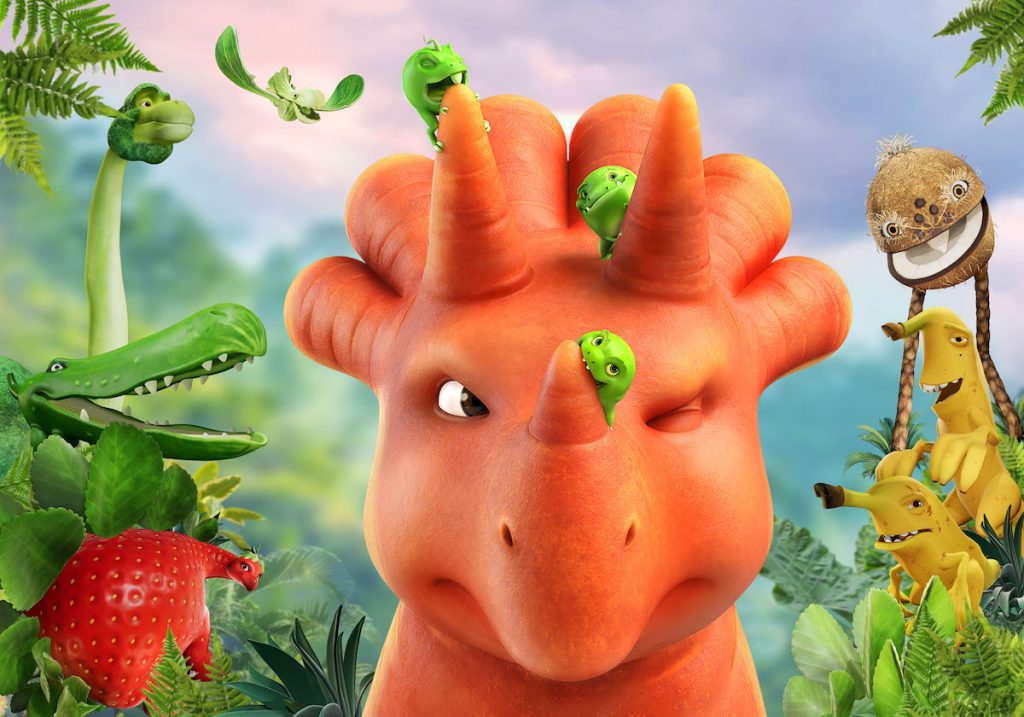 Travel to a prehistoric world of loud roars and healthy eating, in this 20 x 5-minute CGI animated series for 4-7-year-olds, populated by part dinosaur/part fruit-and-vegetable animals.

The young tricarrotops Ginger lives in Vegesaur Valley, home to fellow vegesaurs such as the baby pea-rexes, who embark on standalone adventures featuring relatable themes for upper pre-schoolers like mealtime, sharing, friendship and play.

Revealing the story of how this unique food-and-dino combo was brought to life, Martin Krieger, CEO at distributor Studio 100 Media tells TBI: “One of the creators, Gary Eck, was in a supermarket a few years ago and saw a young child sitting in a shopping trolley playing with a banana and some broccoli. He was making monster growls and roars, so clearly in the child’s imagination the banana and broccoli were huge creatures locked in battle.

“Gary was fascinated and wondered what these ‘monstery’ fruit and vegetables might look like. Perhaps they were a mash up of fruit, vegetables, and dinosaurs. Vegesaurs maybe? He phoned his creative partner Nick O’Sullivan and shortly afterwards the initial concept of Vegesaurs was born.”

Krieger describes this fun mash-up of the genres as “an absurdly silly idea” but adds “we still present it as a credible world for young kids to immerse in, complete with a narrator in the style of a wildlife documentary.

“It also provides the opportunity to spark kids’ interest in fruit and vegetables, in a unique way, which we hope may promote healthier eating and greater engagement with the natural world,” says Krieger, who says the short runtime also makes Vegesaurs ideal for “linear and non-linear distribution” or also to create a viral buzz among kids and parents.