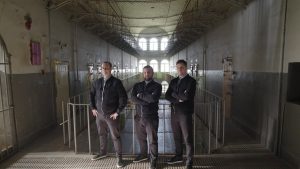 The show – based on the YouTube series of the same name – launched this summer on Talpa’s SBS6 in the Netherlands, with Amazon Prime taking a next day second window.

The Polish version will be produced by Rochstar and is set to air this May. The show hunt takes place in real-time and with real bystanders as contestants are ‘hunted’.

The format was created by StukTV and Talpa Concepts, with Talpa Distribution selling globally.

Discovery in Italy has ordered a local version of Love Productions’ format The Great Sewing Bee and This is MY House, the guessing game from Richard Bacon, Nick Weidenfeld and Expectation.

The six-part Italian version will be known as Tailor Made – Chi Ha La Stoffa, will be produced locally by Blu Yazmine and is due to air on Discovery+ in June 2022 followed by Real Time in the Autumn.

This is MY House is being produced locally by Casta Diva and will be known as Questa è Casa Mia. BBC Studios sells both formats.

The show is being produced by Mastiff and will premiere exclusively in Sweden on SVT and exclusively on WOW Presents Plus in the UK, US, and select territories worldwide.

The series will see the incredible Swedish Queens compete to become the Next Drag Superstar and lip sync their way to the Drag Race crown. The deal for was brokered by Passion Distribution.

The original US series, RuPaul’s Drag Race, has run for 14 seasons.

The original show was created by Stepping Stone Productions and is currently in production for NPO3 in the Netherlands, where it will air in the second half of 2022.

The show follows a group of participants who are bored or burnt-out at work sign up for a career change with a difference; they have to quit their jobs and commit to spending six months trying a new role without even knowing what it is.