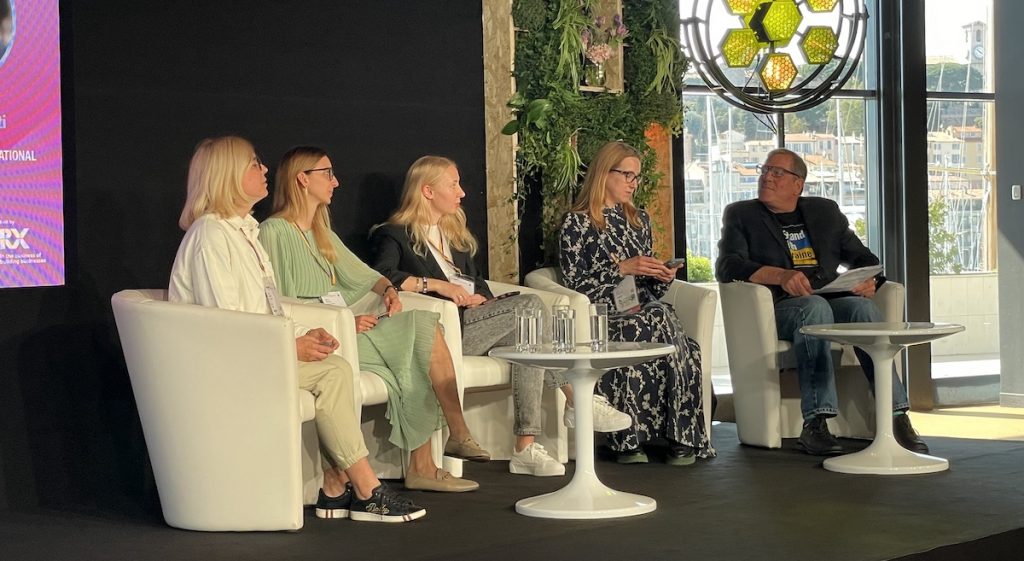 Content and co-operation are the greatest weapons in the arsenal of the Ukrainian TV industry, said execs from the sector at a MIPTV panel in Cannes yesterday.

The panel saw representatives from Film.UA Group, Media Group Ukraine, 1+1 Media and StarLightMedia, who would normally be rivals for viewers and content under ordinary circumstances, come together for the Stand With Ukrainian Content Industry session.

The execs sought to highlight the quality of Ukraine’s content output and promote opportunities to collaborate with creators from the country.

“This is the moment when we really need this support,” said Kateryna Sheveliuk, head of TV fiction production at StarLightMedia, speaking to TBI ahead of the panel. “We would like to keep up sustainable business and to proceed with it; we want to co-operate in the co-production fields, in co-development, in the co-service of both graphics motion design and animation and VFX. So we’re looking for orders.”

Sheveliuk added that as well as co-production opportunities, the global TV community can help to support the Ukrainian sector through content acquisitions. “We hope for sales and understanding, and we hope for support like inviting us to festivals, such as MIPTV, and international platforms. We would like to co-operate.”

Sheveliuk said that the war in Ukraine had shattered the advertising model and predicted there would be “zero income” from advertising until more than a year after any eventual end to military actions.

“We are trying to develop stories still; we are thinking about the new forms of producing something on the very small budgets and with the help of co-production partners and the help of funds etc. We hope for the best and only by joining our forces within the market and abroad we can do something.”

Speaking on the panel, Victoria Yarmoshchuk, CEO of Film.UA Group, minced no words as she reiterated this point: “The best that the world can do for Ukraine now is to co-operate with us.

“Ukraine does not need mercy, pity or condolences, all we need is new projects, co-operation and jobs for creative people in Ukraine. We realised on the very first day of the war that our weapon is content – and we use it to make the world a better place.”

Yarmoshchuk also revealed that content production had not stopped in Ukraine – despite the outbreak of war: “I would like to remind you that Ukraine is one of the biggest countries in Europe and if you look at the maps of military actions you will see that some parts are still safe, so it means that physical production is possible now. We have already started filming in western parts of Ukraine – so physical production will not stop.”

“Our competitive advantage is that Ukraine has lived through many severe crises, this one is the worst one of course, but we know how to work and be productive in very unfavourable conditions.”

Inna Filipova, head of sales at 1+1 Media, said that the Ukrainian industry would like to be “much more integrated in the international media community once the war ends,”

She said: “Let’s cooperate, co-produce, co-create and co-develop together. If I would be asked 40 days ago if it’s possible for a country at war, I would say no. Now, we know it’s necessary.”

Iryna Cherniak, head of TV content sales and director of content acquisition at Media Group Ukraine, meanwhile discussed some of the new projects underway in Ukraine: “We are developing a stand-up format with our host from ‘The Masked Singer’ where, as far as it’s appropriate, we will present humorous analysis of the current events. We will set up a separate form of struggle where the main weapon is the sense of humor.”

Yarmoshchuk also announced a plan to establish an acquisition fund, run by an international board, to accumulate money for the production of Ukrainian content. Those partners who contribute to the fund would then get the content for their platforms and channels.

“Ukrainian content is good, its competitive. The Ukrainian industry is a factory that constantly produces hours and hours of competitive content, but at the moment, this factory lacks fuel. We are not asking for donations – we are asking for cooperation.”