Hope Lynch, who will report to Eleven founders Joel Wilson and Jamie Campbell, joined the company in 2019, working on projects including White Story for Netflix and the upcoming YA horror Red Rose for the BBC and Netflix.

“With vibrant, award-winning shows like Sex Education, a pulsing production pipeline, and a proven track record for championing new talent on and off screen, I couldn’t be more thrilled to conspire with Joel and Jamie and to play a big part in building on Eleven’s successes,” said Hope Lynch.

Book author Crouch will serve as writer and showrunner on the nine-part series, which Matt Tolmach will exec produce, alongside Edgerton and David Manpearl for Matt Tolmach Productions, with Sony Pictures Television producing the series.

Dark Matter will follow Jason Dessen, (Edgerton) a physicist, professor, and family man who  is abducted into an alternate version of his life. Wonder quickly turns to nightmare when he tries to return to his reality amid the multiverse of lives he could have lived.

In this labyrinth of mind-bending realities, he embarks on a harrowing journey to get back to his true family and save them from the most terrifying, unbeatable foe imaginable: himself. 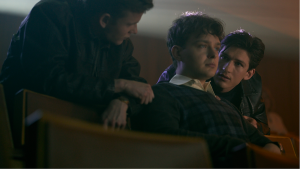 SF Studios will produce the six-part series, which starts shooting this week in Vilnius, Lithuania.

Erik Leijonborg and Daniel Di Grado are directing, and Fredrik T Olsson has written the screenplay, based on Guillou’s novel.

“The series Evil does just that, but it is also a beautiful love story and, in the end, there is hope. We are very happy that we get the opportunity to collaborate with SF Studios and Erik Leijonborg and publish the 2020s version of the successful novel Evil”, said Piodor Gustafsson, director of Nordic drama for TV4 Media and C More.