Dramatic change has been experienced by the TV and video business over the past couple of years according to new research released by UK-based analyst firm Omdia. Recent advances by the online video sector have seen it catch up with and overtake pay-TV.

At the end of 2021, online video had around 1.26 billion global subscriptions, while pay-TV had 1.07 billion. As well as comparing the two market segments individually, Omdia’s new multisubscription TV and video research further explores the important crossover between the two sectors.

COVID-19 has accelerated trends that were already underway, with a spike in online video subscriptions during the pandemic offering some proof of this impact. One of the most striking findings of the multisubscription research is the incredibly swift change that has taken place within pay-TV households. Among the 10 countries analysed by the study (Australia, Brazil, Canada, France, Germany, India, Japan, Mexico, the UK, and the US), there are more than one billion pay-TV & online video subscriptions.

“Although the growth in online video subscriptions has been the most eye-catching recent trend, traditional TV viewing also saw a significant spike in viewing time – again driven by the greater number of people at home looking for viewing entertainment,” explained Omdia senior principal analyst Adam Thomas. 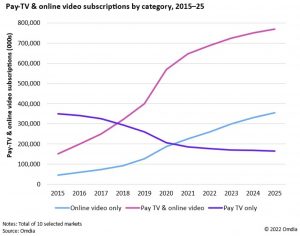 Omdia’s multisubscription data shows that the number of homes not paying for a TV or video service continues to grow slowly. Across the 10 countries there were 2.17 billion unique users in the “not paid-for TV & video” category in 2015, rising to 2.4 billion in 2025. That equates to 39.2% of the potential TV/video viewing population in 2015, rising to 39.6% in 2025.

The stability shown by this segment indicates that much of the growth exhibited by online video comes from existing users taking more subscriptions, rather than huge numbers of new households moving from free to paid.

With online video subscriptions available at a fraction of the price of classic pay-TV subscriptions, why isn’t the paid-for category as a whole growing at the expense of the non-pay sector? Omdia believes the attractive free-to-view viewing options available satisfy the viewing demands of a significant segment of the population.

As the market continues to transition, Omdia expects that AVOD and FAST services will continue to rise in popularity, and usage of such services will dampen demand for paid-for subscriptions.