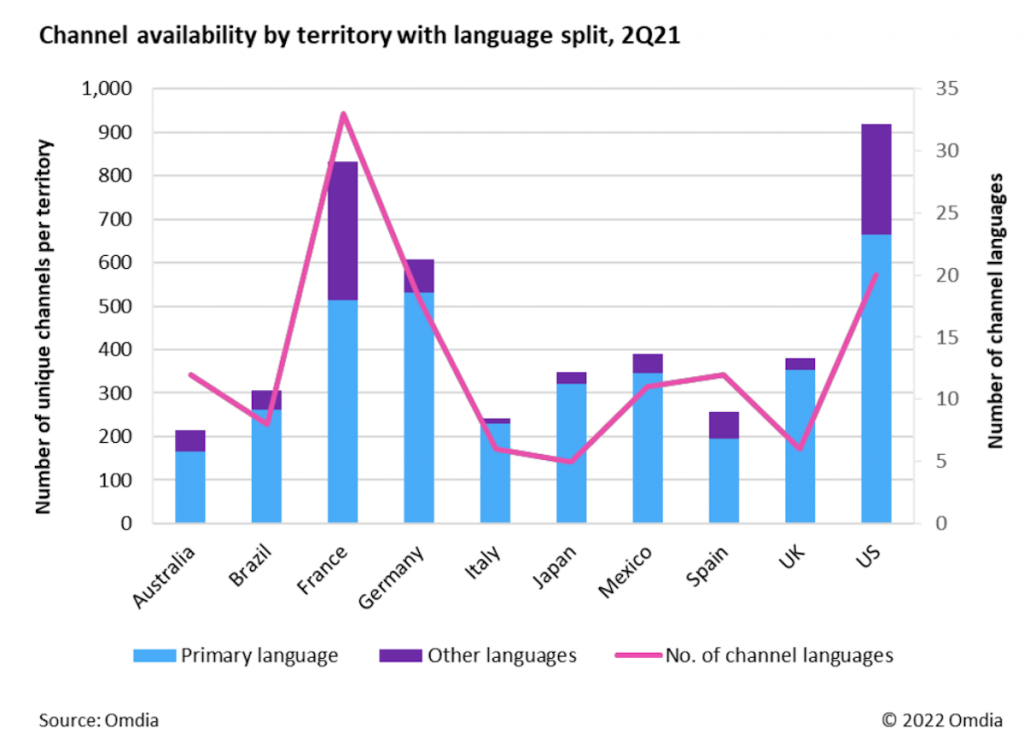 It’s not a close contest either, say the experts from the analyst group, whose new research highlights that those two countries have more than 200 channels more than third-place Germany.

The high channel availability in the US and France can be explained in part by the number of foreign-language channels available to consumers in these territories.

Both countries have a widely spoken second language: Spanish and Arabic, respectively, and operators accommodate these majority minority linguistic groups with extensive catalogs of channels in their languages. Arabic represents 11% of channels available in France and Spanish 17% of those in the US.

Outside of the second language, operators in these territories also offer more linguistically varied channel portfolios. French operators offer channels in 33 different languages, and foreign-language channels account for 38% of total channel availability. This contrasts with Italy, for example, where there are only six languages other than Italian available to consumers, and foreign-language channels only account for 5% of the total channel line-up.

French consumers also enjoy a particular flexibility when it comes to channel choice, with operators offering channels to their customers either through large packages that have a preselected range of channels or through à-la-carte “bouquets,” in which customers choose specific channels to sign up for.

While operators are constantly reviewing and changing their package offerings, there is a divide on how channels are packaged from territory to territory.

In France, where operators offer a large array of smaller à-la-carte bouquets, pay-TV consumers can subscribe to more than 200 different channel packages and the average package size is just 16 channels, while in Italy, there are only 15 packages available in total, but each package has 158 channels on offer on average.

The US is a mixture of the two approaches with providers such as Dish, DirecTV, and Spectrum offering large, multi-genre packages while the cable operator Comcast and online TV providers exploit a wide range of bespoke à-la-carte options.

The US also has a large number of premium channels, which can be purchased as à-la-carte add-ons: HBO, Cinemax, Epix, Starz, and the NBA, NFL MLB League Passes. While some channels or equivalents are available in other territories, they are not as widespread as in the US.