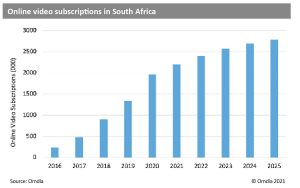 After a tumultuous but ultimately fruitful early period for South Africa’s SVOD market, rapid sustained growth has been achieved for the past five years.

As in many markets, 2020 proved a boom year for SVOD with a 47% increase in active subscriptions. This growth has continued into 2021 and played a role in attracting services such as Disney to the country.

The past 18 months have eroded some of the traditional barriers to SVOD adoption in South Africa, namely the improved availability and affordability of mobile and broadband internet connections. Both increased in 2020 – mobile by 10% and broadband by 7%.

The combination of an expanded addressable market and the added marketing energy and content libraries of new entrants has the potential to accelerate the growth of SVOD subscriptions throughout the region in the coming years.

Existing market players such as MultiChoice’s Showmax and Netflix, which were the primary beneficiaries of the 2020 boom, currently dominate the SVOD landscape of South Africa with 750,000 and 859,000 subscribers, respectively. 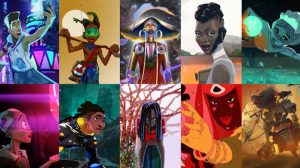 Both providers experienced excellent growth in 2020, with Showmax up 29% and Netflix up 55% on 2019 subscriber numbers.

As such, Disney+ will be entering a territory where there are already several established players.

It has yet to reveal specific details of its strategy for South Africa, although its success in other countries, such as India, has been built on price (low cost) plus a strong mix of local and international content. Greenlights to date include animations Kizazi Moto: Generation Of Fire and musical comedy Kiff.

Disney has also favoured bundling its service with top OTT providers currently operating in the markets it wishes to enter. Such examples include Hotstar in India and Indonesia, and OSN in the Middle East and Northern Africa. In Indonesia, it also took account of the country’s low credit and debit card penetration by teaming up with local financial institutions to make it easier for subscribers to pay.

South Africa, however, represents an excellent location for these services to establish themselves before springboarding into other areas of the continent.

With combined pay-TV and online video revenue exceeding $2bn, the country is easily the most lucrative market in sub-Saharan Africa, being home to the pan-continental juggernaut MultiChoice, which controls DStv and Showmax.

Although Disney+ will face stiff competition from market incumbents, it will rely on its slate of highly regarded and well-known content to persuade the South African public to subscribe.