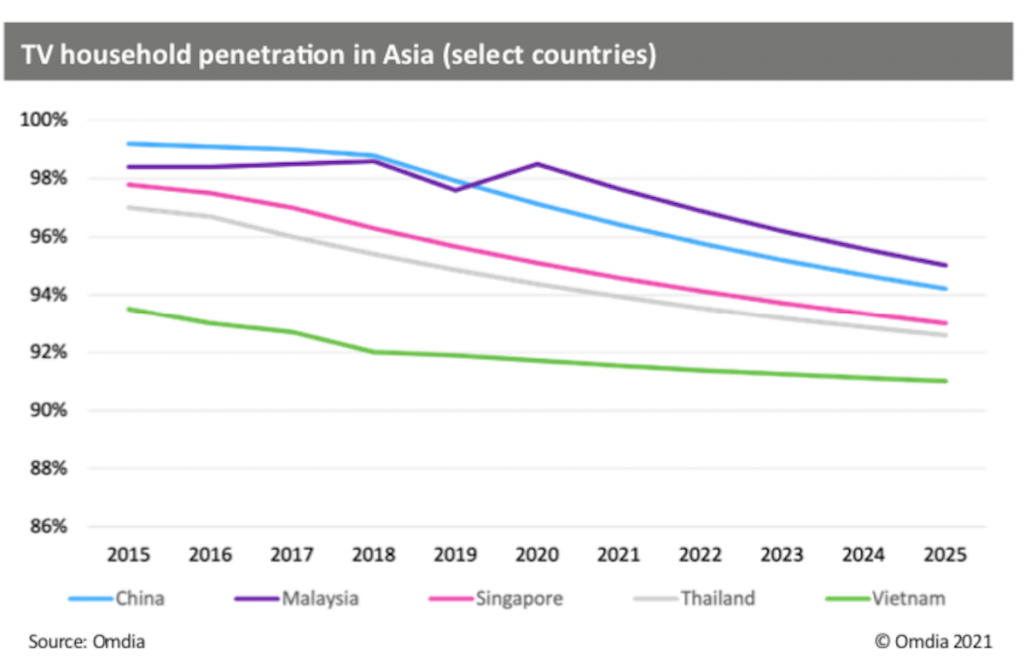 Consumer behaviour is changing and a younger audience base is increasingly turning away from the traditional TV set to consume content in new ways, as Omdia’s Helma Hassan explains.

Over the past decade, it was clear that millennials had different video consumption habits, but the effect was not easy to quantify, often because they were young, cash-poor and not householders. With more census data, patterns are emerging—but the picture is far more mixed than expected. There is no single explanation of regional differences.

In Western Europe and Japan, we observe consistent TV household share decline. This is clearest in Germany, which has below 90% household penetration. Although an aging population also increases total households, and older consumers are heavy users of TV, it is insufficient to counter younger consumers’ changing habits.

By contrast, North America appears to be immune from this trend, with no indication at all that households are turning away from TV ownership despite a younger demographic. Latin America is expected to be static overall, but signs of decline are already observable in Peru and Mexico.

Across Asia, the dominance of mobile- centric media consumption threatens conventional TV ownership. Interestingly, China and Singapore even recorded declines before the smartphone boom. South-Eastern Asian countries already see declining TV penetration. This pattern seems to correlate with living standards—lower income countries such as Myanmar and Indonesia are still on an increasing trajectory, but wealthier countries such as Malaysia and Vietnam already see falling TV households.

By contrast, in sub-Saharan Africa, a receptive consumer base (and low penetration) means TV household growth has been strong in recent years. We expect continuous TV household growth on top of a rapid rise in total household numbers. The appetite for television remains strong in the region, limited only by electricity availability and spendable incomes.

TV consumption is closely tied to the value of content. In India, free and unlimited mobile data has fostered mobile-first video consumption. TV sets expand the screen size for family viewing. Other regions do not have the same battle for subscribers as India. In the Middle East and North Africa, consumers enjoy free international satellite services, with little incentive for entertainment via costly mobile data.

The pandemic changed consumer spending, with lockdowns increasing the value of home entertainment. In 2020, we saw record TV shipments in North America, with strong demand in Europe and Japan. Aside from adoption by non-TV households, the return of younger people to family households caused a decline in non-TV households.

We expect that the pandemic will not change TV ownership patterns permanently, as the underlying trend towards multi-screen online consumption will continue.

The excerpt above has been written by Helma Hassan, research analyst for consumer electronics at research group Omdia, which – like TBI – is part of Informa. The report, Global TV Household Database – 2021 is available here and via Omdia’s monthly publication, Media Tech Digest.