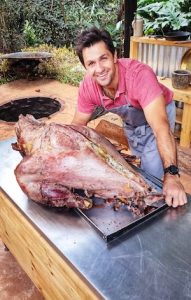 Sony Pictures Television (SPT) has partnered with restaurateur and chef Kiran Jethwa on a new YouTube channel that will also offer original programming.

The Fearless Food channel follows the Nairobi-born cook as he explores local delicacies and the cultures behind them. It will launch a series of original episodes produced by Nairobi-based Quite Bright Films, which include Jethwa cooking a whole ostrich in a giant tandoor.

The originals strand will include features on ‘nose-to-tail’ cooking and sustainable recipes that include pan seared goats brains, sautéed chicken hearts, and a “prawn head popcorn dish”. The channel will also offer footage from Jethwa’s TV shows, including Tales From The Bush Larder and Fearless Chef.

Jethwa is a host on The Great Kenyan Bake Off and since 2016 has been a co-host of Food Unwrapped and Extreme Food, both on the UK’s Channel 4.

He said the YouTube channel, which is the second from Sony following the 2020 launch of Impossible Science, would appeal to “people who want to stretch their culinary imagination and understand how to use ingredients and food to their maximum potential.”

Sarah Edwards, Sony’s SVP of international creative development, added: “We’re always on the lookout to work with and showcase brilliant talent, and Kiran brings to the screen the unique ability to combine his natural culinary flare with his love for adventure.”