Swaminathan became the Obamas’ first permanent hire for the company when she was appointed in 2019 and the husband-and-wife founders praised her “tremendous impact”, adding that she had “laid a remarkable foundation for the future of Higher Ground.”

News of her exit emerged as the prodco appointed Joe Paulsen to become head of business and strategy, while Dan Fierman is to lead on podcast projects as head of audio, alongside creator director Anna Holmes.

Mark R. Wright has also joined as VP of film and TV, with a focus on scripted feature films.

Paulsen was previously special assistant to the president at the White House and deputy chief of staff to Barack Obama during his time in office. He has worked with the Obamas since the early days of their political campaign in 2007 and helped to oversee the creation of Higher Ground.

Fierman is a veteran exec who most recently served as president of LA-based Epic Media and previously led news coverage at MTV. He also held roles at Grantland and GQ.

Holmes is an editor, writer and creative exec who founded Jezebel.com and has written for titles including The New York Times and The Atlantic. She most recently served as editorial director of Topic.com, overseeing the brand’s shorts and series. She previously launched The Michelle Obama Podcast on Spotify, with Fierman.

Wright, who will report to Higher Ground’s head of film and TV, Tonia Davis, joins from Macro, where he developed and produced upcoming sci-fi comedy feature They Cloned Tyrone, and has also worked on the Oscar-winning film Judas And The Black Messiah, Tigertail and Birth Of Cool.

“We started Higher Ground because we wanted to tell stories that not only entertain, but also inform and inspire,” commented the Obamas. “We are so proud of the work this team has done in just a few short years.

“This talented leadership team at Higher Ground will continue to bring fresh perspectives, compelling characters, and a healthy dose of inspiration to all of our projects.” 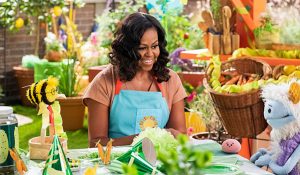 Higher Ground’s overall deal with global streamer Netflix is currently keeping them busy, with several shows in the works, including six-part anthology Blackout, which was announced earlier this month.

Michelle Obama is also host of the 10-episode children’s cookery series, Waffles + Mochi, for the SVOD, while a scripted drama series is also in development based on the Angeline Boulley novel Firekeeper’s Daughter, as part of a multi-genre slate.