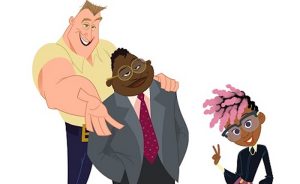 The Proud Family: Louder And Prouder

The animated family sitcom is a revival of the Disney Channel series The Proud Family that ran from 2001-2005. Billy Porter, (Pose), Zachary Quinto (Star Trek) and EJ Johnson (Rich Kids Of Beverley Hills) were this week announced as joining the cast, alongside original series voice actors such as Kyla Pratt and Tommy Davidson, with the show picking up the story of Penny Proud and her madcap family.

The series is currently in production at Disney Television Animation for a 2022 launch on the streamer, with Bruce W Smith and Ralph Farquhar, who led the original show, returning to exec produce.

Original projects in the works include Peeled Prawn & Shaved Sheep, a comedy action-adventure series aimed at 6-12-year-olds; Snö, a magical adventure series for 4-7-year-olds and Trippin’, an 18+ comedy series based around a high octane and extremely offensive US road trip.

The commission for The Proud Family: Louder and Prouder comes as Snipple celebrates its 10thanniversary, with the company also recently renewed to continue its work on DreamWorks Animation’s The Mighty Ones.

“I have absolutely loved building our business and have made brilliant connections with some of the world’s leading networks along the way,” commented Patel. “We’ve developed an approach to animation focused on our people, quality, communication and delivery, allowing us to turn our hand to a wide variety of projects.”