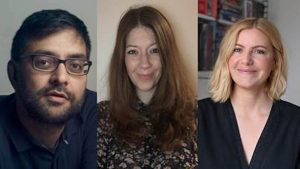 UK-based Sky Studios has expanded its comedy team by hiring a commissioner and two producers from the BBC, BBC Studios and Banijay’s Tiger Aspect.

Alex Moody will join from the BBC this summer as commissioning editor, reporting to director of comedy Jon Mountague.

She has commissioned shows including Mackenzie Crook’s Worzel Gummidge and Motherland for he BBC, and will work alongside fellow commissioning editor Tilusha Ghelani and Mountague to expand Sky Studios’ slate of indie-produced comedies.

The appointment comes a day after the BBC revealed it had hired I May Destroy You producer Tanya Qureshi as commissioning editor for comedy.

Ahmed joins from BBCS having worked on shows such as BBC Three’s Muzlamic, while Churchill was most recently at Tiger Aspect and has been behind shows such as Lazy Susan for BBC Two.

The duo mark the first hires for Sky Studios’ in-house development and production team, which is led by writer-producer Anil Gupta and who joined as creative director for comedy last October.

Ahmed and Churchill’s remit includes identifying new and established writing and performing talent and working with them to develop scripted comedy projects for Sky Studios.

Sky Studios sources, develops and produces scripted originals for Sky’s platforms across Europe, with all projects for Sky UK jointly commissioned by Sky Studios and Zai Bennett, Sky UK’s MD of content. The company’s slate includes comedies such as Intelligence, Code 404 and Brassic.

Mountague said: “Katie, Adnan and Alex are three of the best in the business. They all have brilliant track-records in delivering break-out comedy hits and will each bring their distinctive and diverse taste to Sky Original comedy as we expand both our indie-commissions and our in-house development slate.”

Sky revealed what it described as its “biggest ever” line-up of new and original programming earlier this year, with more than 125 exclusive shows and films set to debut across its channels and Now TV streaming service in 2021.