Danielle Lux, Murray Boland and Janet Oakes have all agreed to continue their partnership with Red Arrow, which bought the UK-based TV and audio production company in 2012. 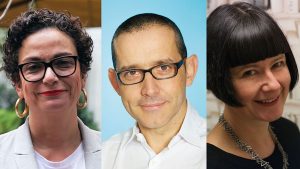 The company’s slate includes the recently announced Quizness (w/t) for the UK’s Channel 4, as well as Sky One’s long-running show A League Of Their Own, the US version Game On! for CBS.

C4 also airs a variety of spin-off series including The Restaurant That Makes Mistakes and Married At First Sight, while Red Arrow Studios International distributes all of CPL’s content globally.

Henrik Pabst, chief content officer of Seven.One Entertainment Group, the entertainment arm of ProSiebenSat.1, said: “CPL Productions is one of the UK’s most creative and successful production companies, and we are delighted to be extending our relationship. We can’t wait to see Danielle, Murray, Janet and their great team continue to create and produce hit UK and international TV.”

Lux was MD at Celador Productions before leading a management buy-out of the business in 2007 to become CPL, while creative director Boland helped to develop hits including reality format Survivor with producer Charlie Parsons before joining the firm. Oakes landed at CPL in 2010 as commercial director following stints at firms including Hasbro.

The deal is a fillip for Red Arrow, meanwhile, which was nearly sold to All3Media last March before the sale was pulled, as revealed by TBI. Since then, execs including former CEO James Baker and former group creative director Nina Etspueler have left and sources have suggested that the company could face losing its talent as ProSieben looks to focus on its core German market.