Belgium’s RTBF seeks ‘The Way Out’ 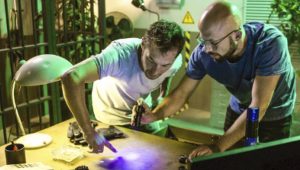 Belgian pubcaster RTBF has commissioned a French-speaking version of escape room format The Way Out, following the success of the country’s Dutch-speaking edition that aired on VTM.

This new adaptation is to be produced by local prodco Roses Are Blue, the original creators of the format, who are also producing a second season for VTM, as well as a first season for the Netherlands’ Talpa Network. All three versions are scheduled to launch this autumn.

In addition to these straight-to-series commissions, Be-Entertainment has also closed option deals in France, Germany, Denmark, Sweden and Norway.

Each episode of The Way Out follows two different celebrity duos who are sent into two identical rooms full of mysteries to be solved. The pairs are challenged to work out the scientific experiments and unravel the codes, with every test or assignment they complete providing them with a clue to help them escape first.

Be-Entertainment MD Gepke Nederlof commented: “This is the first escape room format that’s truly able to engage the viewer by switching from the ‘adventure room’ to a studio set-up. Interviews with the celebs and additional insight into the experiments given by an expert add maximum tension throughout the episodes.”

Roses Are Blue is the outfit also behind shows including One Year Off, Down The Road and Animalitis.