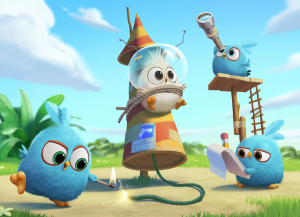 Netflix has ordered an animated series from UK-based Cake and game company Rovio Entertainment based on the Angry Birds franchise.

Angry Birds: Summer Madness (40 x 11-minutes) will include existing characters from the IP and new characters as they spend time at a summer camp.

The show will premiere in 2021 and feature the “explosive antics, improbable pranks and crazy summertime adventures” of the birds as they fend off the pigs on the other side of the lake.

“Angry Birds have been a true phenomenon for kids around the world and we’re excited to bring them home to the nest at Netflix where they will be angrier and bird-ier than ever,” said Curtis Lelash, Netflix director of original animated series.

Ville Heijari, chief marketing officer at Rovio, added: “Angry Birds animated content plays a key role in our long-term franchise strategy. After more than a decade in hit games, blockbuster movies and licensed products, this is the Angry Birds’ first foray into a longform series.”

Angry Birds started life as a mobile game in 2009 before being turned into numerous on screen properties, including series such as Angry Birds Toons and The Angry Birds Movie.