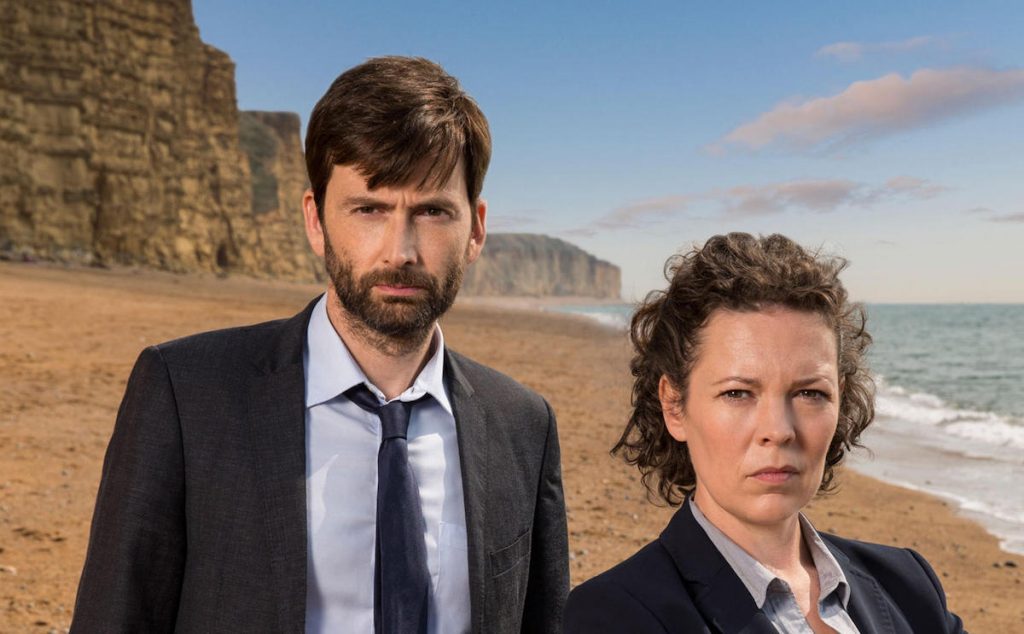 ITV and the BBC have revealed the look of their forthcoming UK-focused streaming service BritBox and priced the offering on par with the cheapest Netflix subscription.

Iconic British shows such as BBC comedy Gavin & Stacey and ITV drama Broadchurch (pictured) will be offered for a monthly subscription of £5.99 ($7.50), along with reality series Love Island and more recent scripted series such as Gentleman Jack. Original programming will also feature, with the first expected to be commissioned soon with a 2020 launch.

Shows which are currently on other platforms will be removed once rights deals run out to make their way to BritBox, although TBI understands some series from the BBC and ITV archives could be available on a non-exclusive basis, meaning they can co-exist with programming currently available elsewhere.

BBC Studios, the public broadcaster’s commercial arm, also recently took full control of UKTV linear channels including Gold and Alibi, which air a raft of archive UK shows including Gavin & Stacey, as well as viewer favourites such as comedy Only Fools and Horses and dramas like Death In Paradise. It also operates an AVOD service, UKTV Play, which offers access to box sets of archive shows such as Silent Witness and Birds of a Feather.

BritBox’s management team will be headed up by Reemah Sakaan, group director ITV SVOD, who will be responsible for making editorial decisions while ensuring alignment with ITV’s and the BBC’s branding and editorial policies. She will report to Kevin Lygo, ITV’s director of television, who has overall commissioning responsibility for BritBox.

The service will be controlled by ITV with the BBC contributing to the development of the “core purposes and strategic direction of the venture”. ITV holds 90% of BritBox’s equity with the remaining 10% held by the BBC – though there is an option for the BBC to acquire additional shares up to 25% in total and ITV will have the ability to bring additional investors on board.

The PSBs confirmed that there will be no advertising on BritBox, and that they view the service as one Brits will subscribe to “in addition to their current subscriptions.” They also said that BritBox will be a “multi-genre service, with a strong focus on multi series drama boxsets”, with “thousands of hours” of British television on offer.

The service’s imminent launch comes three years after ITV and BBC Studios joined forces to launch BritBox in the US, with AMC Networks onboard as a minority partner.

Carolyn McCall, CEO of ITV, said: “The agreement to launch BritBox is a milestone moment. Subscription video on demand is increasingly popular with consumers who love being able to watch what they want when they want to watch it. They are also happy to pay for this ease of access to quality content and so BritBox is tapping into this, and a new revenue stream for UK public service broadcasters.

“ITV and BBC have made, and continue to make, the programmes that both reflect and shape British culture and creativity. We now look forward to working together to launch the largest collection of British boxsets ever – bringing the very best in past, present and future British programming and award-winning content to viewers all in one place.

“We are committed to making BritBox UK a great success. Discussions continue with other content and distribution partners and we are looking forward to making further announcements in the coming months.”

BBC director general, Tony Hall, added: “We have a world beating TV industry with outstanding content. The BBC and ITV are at the centre of that. Together, we have been responsible for delivering the majority of “must see” moments on British TV over the last decade. That ‘must see’ content will now be on BritBox.

“But this service isn’t just about the past. I am really excited about the new shows it will commission. With a remit to be daring and different, many future classics will be commissioned and live on BritBox for the future. These are exciting times for people who love quality TV. Importantly, these shows will be truly British, showcasing our culture and telling distinctive stories. It’s what makes real British TV so special.”

Assessing the announcement, Paolo Pescatore, Media and Telco analyst at PP Foresight Tech, described the “long overdue” move as “too little too late.”

“Netflix has a huge head start over this and forthcoming new services from the likes of Apple, Disney and others.

“However, [BritBox’s] pricing is punchy and the content offering looks attractive. It represents a great channel for British produced content. The key to its success will be distribution and partnerships with cable, pay TV and telco providers.”