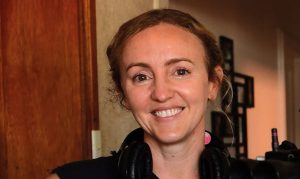 I have been fortunate enough to write two series of The Letdown, a very personal, narrative comedy about modern-day parenting. I have co-written every episode with my work partner, Alison Bell, from early blue-skying, to methodically breaking down stories to physically writing the dialogue. We do it all together. We also work in a program called Writer’s Duet, which allows us to literally finish each other’s sentences. Which we do, often.

This shorthand we’ve developed over our four years of working together, has proved an efficient way to work while also allowing our scripts to have a singular voice. It’s also why we’ve decided against bringing other writers into our room – tonal consistency is so important for comedy. Or maybe that decision is more about our tendency for micro-management. And I don’t like to share.

In the early days, when we first spoke about our vision for the show, we were adamant that the comedy should always come from truth. This, we thought, would be how we could freshen up the usual parenthood tropes, and we knew we could write with authority and validity if the stories actually happened in real life.

We never wanted to shy away from the darker moments of new motherhood, such as the loss of identity many new mothers face, while always finding the comedy, like lying to a stranger about not breastfeeding, just so you can drink your double-shot coffee without shame or judgement, only, of course, to be caught out. This commitment to comedic truths meant that almost every storyline had to have happened to one of us, or at least to family or friends.

Nothing was sacred and early brainstorming sessions are often us fleshing out our favourite stories and moments from the past year of parenthood. You’re on high alert as a writer, always on the lookout for interesting characters and ideas, and it’s surprising at how adept you become at mentally filing stories away. This is particularly valuable for me between series. I don’t work well under pressure and like to write down ideas whenever I can. I have a document called ‘Nuggets’ that I add to regularly – like right now, watching one of my kids parade around naked, avoiding a bath. It’s all gold.

As I have been LA-based for a number of years, we have been lucky enough to write out of Charlie’s, a unique, creative hub that is part of Australians in Film, located within the historic Raleigh Studios in Hollywood. With the support of Creative NSW, which has funded our desks for both series, we’ve had our own nurturing space and, most importantly, our own coffee machine, which has really helped with the creative flow.

I’m not sure how typical our writing process is, but we’ve convinced ourselves it’s okay to talk and laugh all day – it’s a comedy after all. Our process feels free and uninhibited; we try not to hinder ourselves with structure and guidelines. Boring. Our aim is always to simply tell the story in the most interesting way.

Having said that, we really love detail and a theme. It’s not uncommon for us to spend all day coming up with episode titles or searching for tenuous thematic links that realistically no audience member would ever comprehend.

Still, it keeps the process fresh and interesting, which is increasingly important when you’re looking at 13-plus episodes of television. Writing subsequent series has been joyous, as I felt the second series was a lot smoother and easier than the first, and maybe the third could be easier still.