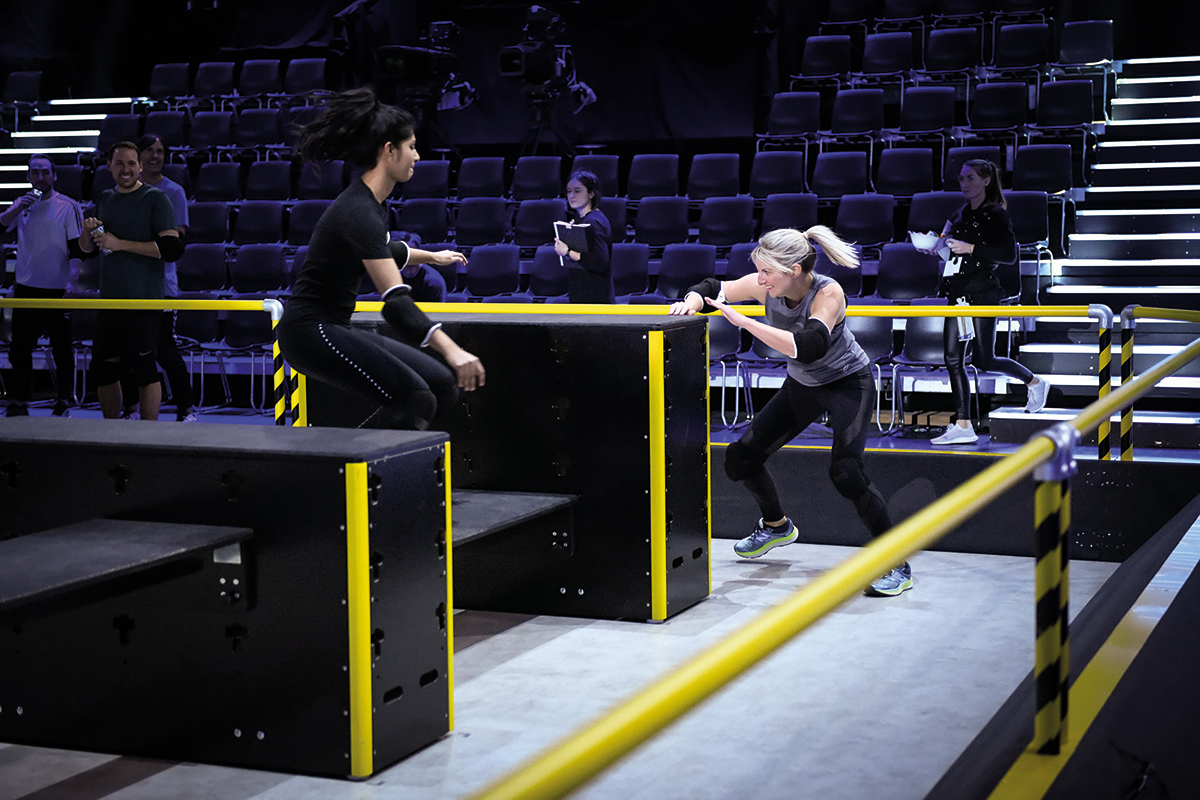 Banijay Rights’ latest format serves up a game of ‘tag’ unlike you’ve ever seen before. Manori Ravindran overcame a few hurdles on the Cologne set to catch up with Brainpool TV’s new physical format

Banijay’s biggest bet at MIPTV turns the simple game of ‘tag’ on its head with a high-intensity format that is as universal as they come, albeit with some fancy parkour-fueled hijinks.

Produced by Lucky Pics and Banijay-backed Brainpool TV, Catch was originally commissioned by German commercial channel SAT.1, which is airing the format in a three-hour block this spring following a December pilot.

“It has a really simple idea behind it, which is to make a show out of a children’s game,” Marcus Wolter, CEO of Banijay Germany, tells TBI.

“From the first moment, you know what the game is all about. Everyone has played it and knows what it feels like the second before you tag someone.”

Banijay Group has developed around 30 different games in order to scale the format to the needs of different markets. Games such as ‘Under Construction’ cost more, while challenges such as ‘The Circle’, a baton race around a makeshift arena, are less expensive.

Looks are, however, deceptive with two-tier obstacle course ‘Under Construction’.

The construction-themed game finds participants hoisting themselves over hurdles; shuffling down balance beams; being launched into heavyweight punching bags that need to be maneuvered just so in order not to be mowed to the ground; and eventually jumping six feet into a pool of foam padding. All this while a competitor follows in hot pursuit.

Elsewhere, another obstacle course consists of six black freestanding platforms of varying heights. The course is tailor-made for parkour experts, who elegantly leap from one to another, sometimes careening around sharp corners, and other times dangling from a platform hands outstretched to collar an opponent.

The format plays out in Brainpool TV’s massive studio in Cologne – once a cable factory that was used to construct the first submarine cables that laid on the Atlantic Ocean floor, connecting Europe to North America. With four studios available, there is plenty of space – and tech – for the likes of Catch. One of the most impressive features of the German show is the state-of-the-art spider-cam that zips through the air from all corners.

Used to film sporting events such as football games, the spider-cam can move both vertically and horizontally to capture the action, thanks to cables connected to a gyro-stabilised camera-carrier.

“The more we have those games that people can replicate with their families in their backyard or park, the less they need expensive gym memberships or to buy lots of equipment, because you can play chase anywhere.”
Lucas Green, Banijay Group

According to Lucas Green, head of content for Banijay Group, borrowing modern filming techniques that have been pioneered in professional sports has served to elevate physical formats into success stories.

“The spider-cam really allows you to get up close and follow the action,” he explains.

“If this show was produced 10 years ago, you wouldn’t be able to get into the heart of the drama as you can now.”

In Germany, there is increasingly a robust audience for punchy physical formats, particularly on the back of RTL’s Big Bounce Battle and Ninja Warrior Germany.

However, Tobi Pollmüller, creative producer with Lucky Pics , explains that, “What’s good with Catch is that, for the first time, we have a show that focuses primarily on running, which is not a huge part of Ninja Warrior or Big Bounce. It’s very unique and we notice that the audience is fascinated by it.” 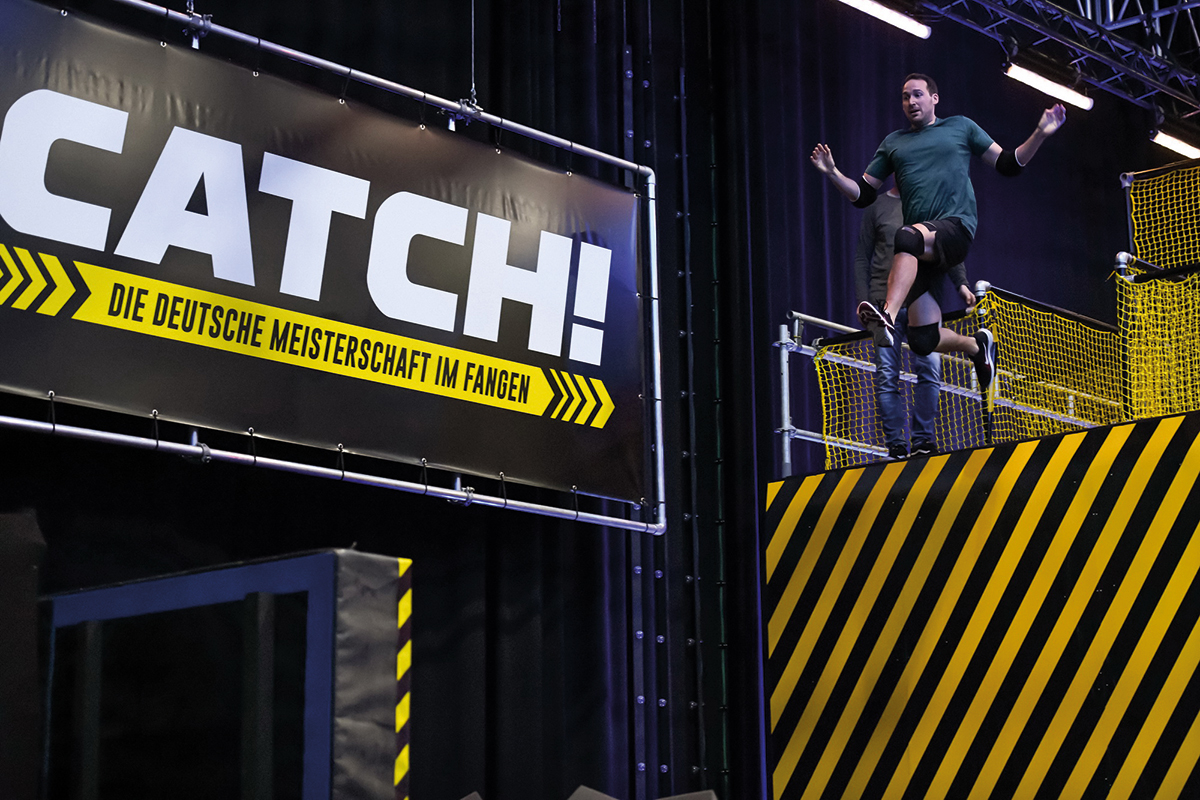 While the show plays out in a three-hour block in Germany, where audiences are used to such scheduling, there is scope for shorter versions of Catch that take advantage of its range of available gameplay.

“You can play this with faster games, smaller teams and fewer games,” explains Marcus Wolter, CEO of Banijay Germany.

“It could air as a one-hour, two-hour or three-hour event version. You can choose how many games to put into one show.”

Green adds that the show is easy to sell to producers and broadcasters because of its simplicity and scalability. “You don’t need to spend a long time explaining how this works, so it’s a great family show.”

Moreover, there is a pricepoint for the format that makes it affordable for even a small territory in the Nordics. “It’s not hugely expensive because it’s really about a game of chase, and you can pick and choose what games to make it affordable.”

However, the format’s piéce de résistance, ‘Under Construction’ would likely figure in most international versions of the show.

“It is a more expensive game because there are more pitfalls and drops, and more padding and safety is required because you’re running up and down. That sort of game would be in every [show] so you’re getting better value for money.”

However, the simple games – such as the obstacle course with big blocks – are equally a major selling factor, says Green.

“The more we have those games that people can replicate with their families in their backyard or park, the less they need expensive gym memberships or to buy lots of equipment because you can play chase anywhere.

“That’s very easy to transfer between different territories,” says Green, adding that another game called ‘Blind Catch’ finds a blindfolded player being guided around an empty arena by a teammate stood at a distance in a bid to help them catch a blindfolded opponent.

Banijay is currently exploring the potential for a German and Scandinavian hub “to allow even greater economies of scale while still retaining the profile of the show”.

Another option is, of course, to construct localised courses. Brainpool TV’s Pollmüller notes that some of the games can be shipped, adding that “they are constructed in order to facilitate shipping via tracks”.

Meanwhile, though German Catch is not shot live, there is also room for that functionality within the format.