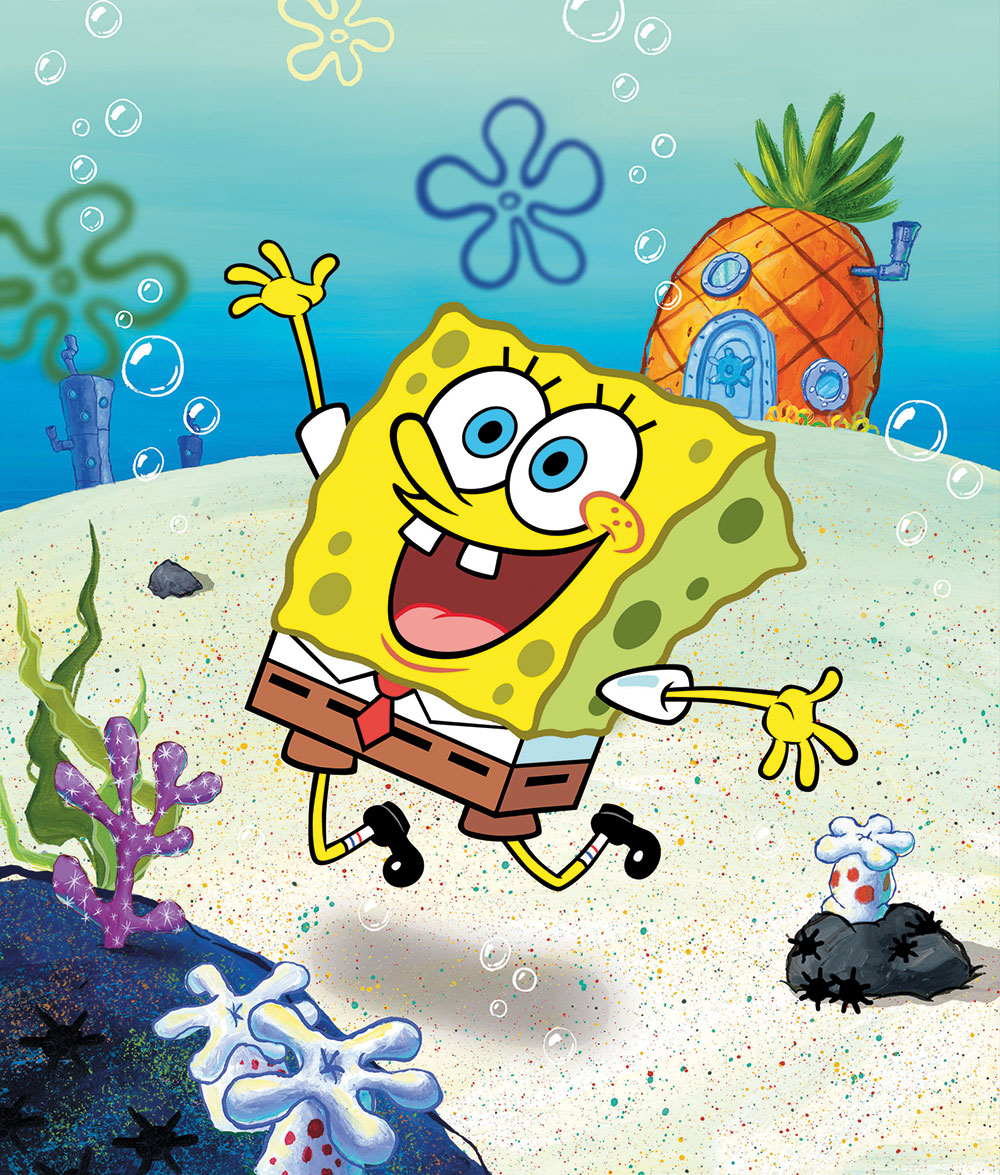 Spongebob Squarepants is by far the most ‘demanded’ title among children worldwide, according to new data by Parrot Analytics.

Data from May to July 2018, highlights that the chirpy yellow sponge comes up top in Parrot lists that rank programming demand by analysing video streaming consumption, social media, blogging platforms, file-sharing and peer-to-peer consumption around the world–all handily compiled into ‘demand’ expressions.

To ensure a fair comparison between territories, Parrot works out an average of the total audience demand expressed for a title among these activities per 100 people in a country.

Across territories, global Parrot data shows that Spongebob drew an average 1.99 demand expressions per 100 individuals between May and July.

Interestingly, many of the titles that follow Spongebob are relatively recent productions and the majority are CGI creations. Meanwhile, the underwater hero is a near 20 year-old animation that will be marking its anniversary with a twelfth season in 2019.

Allen Bohbot, founder and MD of 41 Entertainment, which works with long-running kids brands such as Pac Man and King Kong, tells TBI this is not unusual for kids programming. 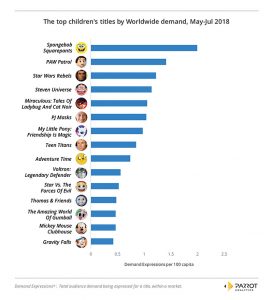 “Spongebob appeals to both kids of today and kids of yesterday who have now grown up and still watch it. You get this kind of consistent rating because it has a broader audience,” he says.

“The 1% of shows that work, they tend to stick and repeat. It’s really hard for new stuff to break through when it comes to kids. So this research makes complete sense.”

Other titles to appear in the top 15 worldwide list include kids hit PJ Masks, which gathered 1.04 demand expressions per 100 people, Hasbro’s My Little Pony: Friendship Is Magic, which drew 0.97, Cartoon Network’s Teen Titans, with 0.85, and the Turner channel’s Adventure Time, with 0.74 expressions.

Netflix’s Voltron: Legendary Defender is the only title from a global streamer on the list. It arrives in tenth place, drawing 0.55 demand expressions per 100 people worldwide.

Despite the fact that Nick shows rank highly on Parrot’s global list, Disney and Cartoon Network both have the highest proportion of titles on the list with four shows each.

“Kids respond viscerally to a design, image or what other kids say to them,” adds Bohbot. “It’s really hard to launch a title that they’ve never heard of.”
In fact, the majority of the titles on this list have either been around for longer than five years or come from a heritage brand. From Voltron to My Little Pony, these titles have touched on viewers’ lives at some point in the past.

“When we did Pac Man three years ago, it was an instant success because everyone knows Pac Man. It broke through all of the testing. The longevity is also greater when you have a title that’s on a broadcaster like Nick because they can commit to it.” 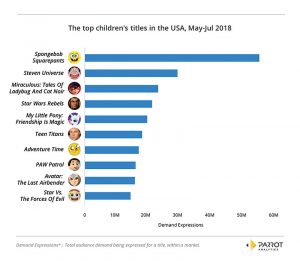 In Parrot’s top ten kids programming breakdown for the United States, Spongebob received nearly twice as many average demand expressions than the second title on the list, Steven Universe.

Specific channels do not dominate here, with the top ten list split fairly evenly between Nick, Cartoon Network and Disney shows, among others.

Nickelodeon’s Avatar: The Last Airbender also makes an unsuspected entry in the US list drawing near 16 million demand expressions in ninth place. The series ran for only three seasons from 2005 to 2008. It was, however, reissued for its 10th anniversary this June.

Interestingly, only two of the top ten kids’ titles on Canada’s list are homegrown. 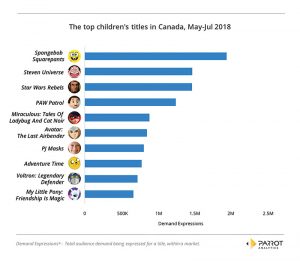 Canada is also the only nation in review that has Netflix’s Voltron: Legendary Defender on the list. The DreamWorks Animation, World Events Productions and Studio Mir title arrives in ninth place with just over 721,000 average demand expressions.

Furthermore, Canada is the only one to include Entertainment One, Frog Box and TeamTO’s PJ Masks in its list. The title drew over 808, 000 average demand expressions in seventh place.

Otherwise, the territory reflects the worldwide appetite for shows, with Spongebob coming up top with near 2 million average demand expressions and titles such as Steven Universe and Star Wars Rebels ranking highly.

Mexico has no local programming in its kids top ten list. It differs from the US and Canada with only one show, Disney’s Gravity Falls, which takes seventh place on the list and generated over 2.5 million average demand expressions in the country. 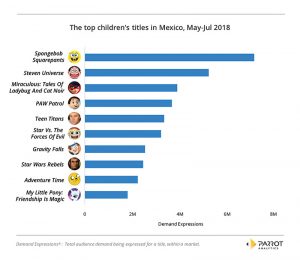 With a bigger audience at hand in the country, Spongebob reached nearly 7.2 million average demand expressions. That is roughly 2 million more than Cartoon Network’s Steven Universe.

While Parrot did not break down European countries individually in this research, it’s interesting to note that when it did so in September 2017, many of the same titles appeared on the list.

Across Europe at the time, Spongebob Squarepants topped the regional list yet again and titles such as Star Wars Rebels and PAW Patrol also ranked highly.

Some titles in Europe’s top ten did show a regional preference, however, with Italy’s Winx Club coming in third and Russia’s Masha and the Bear coming in sixth.

Unlike adult genres, the global SVOD services have yet to make significant in-roads across on-demand children’s content. The only digital original title in Parrot’s worldwide top 15 is Netflix’s Voltron: Legendary Defender.

So, in a space where streamers are still investing money and time into bringing original kids IP to their platforms, why is it not transcending globally?

Ovum’s chief entertainment analyst Ed Barton tells TBI that there are three key reasons for this. Firstly, he says: “SVOD investment focus has been on non-kids content production up to now. The kids content in their catalogues is largely licensed from broadcasters or kids IP content owners.”

Take Netflix. Its first push into original content for kids arrived as late as 2013. By 2015, only 14 original shows had premiered on the platform. When comparing this to the thousands of hours of programming across broadcasters, it has been a small part of the kids business until recently.

Barton also adds that kids content tends to be more locally focused than other content types. “It is harder to create truly global kids IP, which would limit its appeal to the SVOD services compared with shows like The Grand Tour.”

Lastly, there’s one platform that is dominating the SVOD space for kids. “YouTube usage among kids is huge globally. It’s easily accessible; mobile-friendly and a free source of a lot of kids shows,” explains Barton.

The platform also hosts a range of content from broadcasters to individual content providers. This means an already popular title on broadcast can become even more so through the platform.

Bohbot believes that a lack of viewer ratings from streaming services has a lot to do with why top kids shows from them do not appear on the list.

“I think we’re in a market transition and I don’t think you’re going to be able to capture this data that well yet. There’s clearly a migration from linear to non-linear, but in certain markets you won’t see that.

“If you look at ratings in the US, viewing figures for channels like Nick, Cartoon Network and Disney go down by near 20% every single week. You have to assume kids are moving to a streaming play, but there’s no way to know that because there’s no independent data on Amazon and Netflix.”

He continues: “To me, there’s no argument that can be made to convince me that the streamers don’t have the top 25 shows when based on audience. It’s impossible–they have to be. We’ll be having a very different conversation in five years.”