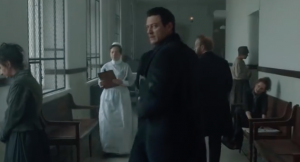 TNT has ordered The Angel of Darkness, a new limited series based on the sequel to best-selling author Caleb Carr’s The Alienist.

The Alienist TV series has reached more than 50 million people across platforms, according to TNT. It has also earned six Emmy Award nominations, including outstanding limited series.

The title is a turn-of-the-century murder mystery amid the underbelly of New York City’s ‘Gilded Age’.

Its sequel, The Angel of Darkness, is a coproduction of Paramount Television and Turner’s Studio T with Eric Roth, Anonymous Content’s Steve Golin and Rosalie Swedlin and Cary Joji Fukunaga serving as exec producers.

“We could not be prouder of The Alienist’s outstanding, award-worthy performance and all of the work the incredible actors and crew put in to bring that story and time period to life,” said Sarah Aubrey, executive vice president of original programming for TNT.

“Our audience fell in love with these multi-dimensional, timeless characters and the journey of their struggles living in complicated times. With this new story in TNT’s Suspense Collection, we will further immerse viewers into their world as they are confronted with a new enemy.”

Tags: Original Programming, The Alienist, The Angel of Darkness, TNT