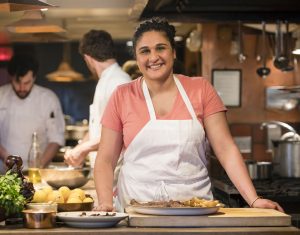 Netflix has used the TCAs to announce a number of new series coming to the streaming service later this year and into 2019.

The headline shows include new limited series starring and produced by Oscar winner Octavia Spencer; new drama from the producers of The Crown; a new Gothic series with Kiernan Shipka of Mad Men; a return to TV for Michael Douglas, and cooking expose Salt, Fat, Acid, Heat (pictured).

Alongside that, showrunner Alex Pina is teaming up with Crown producers Left Bank to bring White Lines to screens. The series focuses on the shady setting of Ibiza’s clubworld. Andy Harries and Sharon Hughff will executive produce the series for Left Bank.

The third major scripted series announced in LA is the Chilling Adventures of Sabrina, which reboots the story of Sabrina the Teenage Witch in a more adult, horror-led direction. Warner Bros. Television-based Berlanti Productions has installed Riverdale showrunner Roberto Aguirre-Sacasa as lead creative behind the series, which launches in October 2018 with Kiernan Shipka starring.

Netflix has also announced that Oscar winner Michael Douglas will return to the small screen in The Kominsky Method. Written by Al Higgins, David Javerbaum and Chuck Lorre, who also directed the first episode, the drama takes a light hearted look at two entertainment veterans in the twilight of thier careers. Lorre, Higgins and Michael Douglas executive produce the series which is produced by Chuck Lorre Productions, Inc. in association with Warner Bros. Television.

Netflix’s unscripted offering will be boosted by a spin off of Samin Nosrat’s best-selling, James Beard Award-winning book, Salt, Fat, Acid, Heat. Nosrat hosts, and will travel the world, ‘to demystify and explore the central principles of what makes food delicious and how each of us can easily incorporate those elements into every dish. The show is produced by Cooked creators Jigsaw Productions