Netflix has pulled off perhaps its biggest production coup to date by prising US super-producer Ryan Murphy away from Fox through an exclusive US$300 million deal. 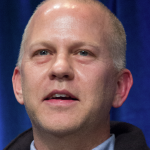 Over recent weeks, rumours have rumbled on that SVOD giant Netflix would sign Murphy (pictured), who is known for series such as American Horror Story and Glee, to bolster its original programming ranks.

The firm has now secured an overall deal worth between US$250 million and US$300 million that begins on July 1, wt which point Murphy will exit his current contract with Twentieth Century Fox Television.

Speculation over his future at Fox began when The Walt Disney Company secured a US$52.4 billion deal for the entertainment assets of 21st Century Fox towards the end of last year.

“The history of this moment is not lost on me,” said Murphy. “I am a gay kid from Indiana who moved to Hollywood in 1989 with US$55 dollars in savings in my pocket, so the fact that my dreams have crystallised and come true in such a major way is emotional and overwhelming to me.”

For the traditional Hollywood studios, the deal is another reminder of the pressure that mega-financed digital companies are exerting.

Netflix has already landed a blow on ABC Studios by signing another of America’s top producers, Shonda Rhimes, to a similar deal, while Amazon Studios has the exclusive services of The Walking Dead creator Robert Kirkman.

“Ryan Murphy’s series have influenced the global cultural zeitgeist, reinvented genres and changed the course of television history,” said Ted Sarandos, chief content officer at Netflix. “His unfaltering dedication to excellence and to give voice to the underrepresented, to showcase a unique perspective or just to shock the hell out of us, permeates his genre-shattering work.

“From Nip/Tuck – our first licensed series – to American Crime Story: The People v. O.J. Simpson and American Horror Story, we’ve seen how his brand of storytelling captivates consumers and critics across the globe. His celebrated body of work and his contributions to our industry speak for themselves, and we look forward to supporting Ryan in bringing his broad and diverse stories to the world.”

Murphy already has two series in production for Netflix – Ratched and The Politician. He also currently oversees production of FX pair American Horror Story and Feud, Fox’s 9-1-1 and the upcoming Pose.