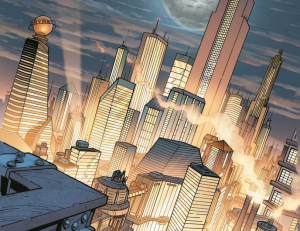 DC Entertainment and Time Warner cousin Warner Bros. Television are coproducing Metropolis, which will comprise 13 episodes exclusively for the service.

The straight-to-series order means production will begin this year ahead of a 2019 debut, after the branded Warner Bros. Digital Networks-operated service has gone live.

Metropolis will follow Lois Lane and Lex Luther in the City of Tomorrow before the arrival of Superman, with the pair investigating fringe science and exposing the town’s dark and bizarre secrets.

Gotham’s John Stephens and Danny Cannon are executive producers and story creators, with the former working on the teleplay and the latter directing the first episode.

The DC service has already ordered three other series from the Warner Bros. stable: Titans is another live-action drama, while Harley Quinn and Young Justice: Outsiders are from Warner Bros. Animation.

Warner’s play is to provide “an immersive experience designed just for DC fans”, effectively going directly to them with a well-known brand that has its own fans.