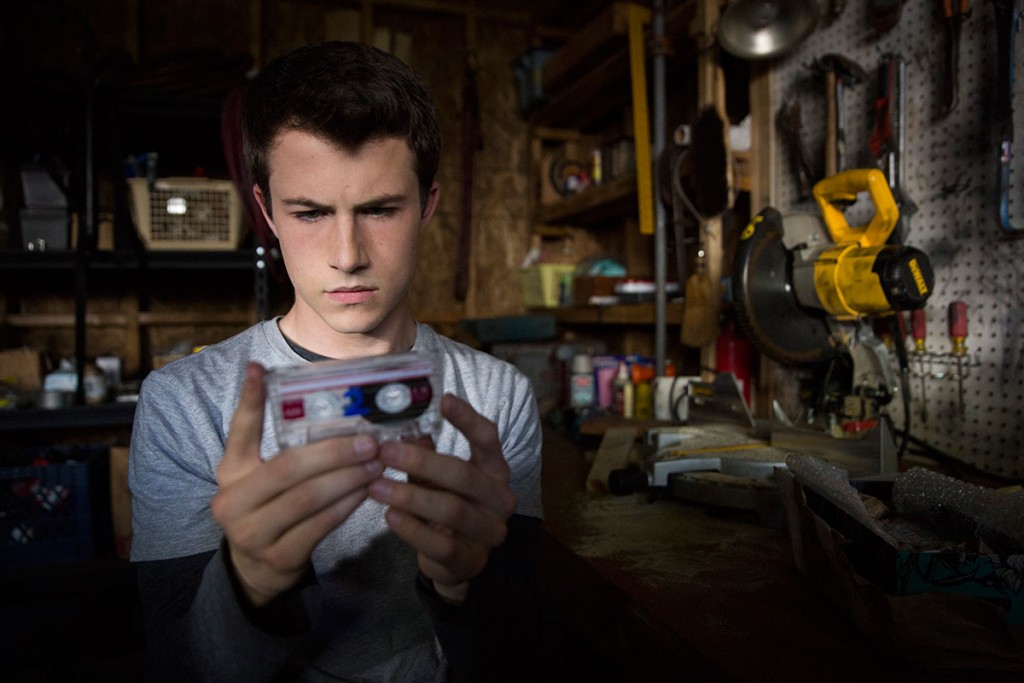 Two shows clearly stand out from the crowd in Central and Eastern Europe right now.

13 Reasons Why tops charts our digital charts in the Czech Republic, Poland and Romania, is second in Croatia, third in Hungary and fourth in Ukraine.

Game of Thrones wins the overall charts in the Czech Republic and Romania, and is a top-four fixture in three of the other four territories Parrot Analytics studied.

With NATPE Europe now behind us for another year, our data shines a light on key trends from the CEE. 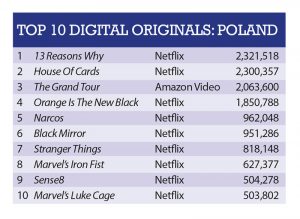 With 13 Reasons Why at the top of the digital chart, Polish audiences showed just less demand for House of Cards (2.32 million vs 2.3 million).

The Grand Tour and Orange is the New, the following two placing series, both came in around the two million demand expression mark, with Narcos in fifth nearly a million behind fourth. 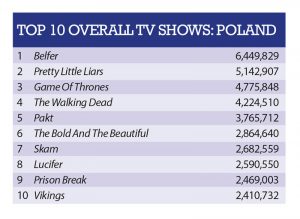 Meanwhile, as our news story this morning highlighted, Canal+ Poland original Belfer, a crime drama from TVN, was by far the most popular overall series.

It was well ahead of Pretty Little Liars, which remains one of the most consistently in-demand series on the market.

Game of Thrones was third, ahead of The Walking Dead, with local series Pakt ahead of US soap The Bold and the Beautiful and Nordic drama Skam.

Lucifer, Prison Break and Vikings brought up the rear. 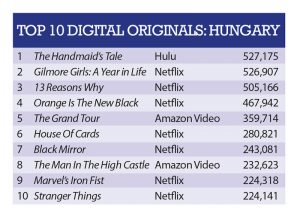 Consumers in the home of NATPE Europe show different tastes, with Hulu dystopian drama The Handmaid’s Tale just eclipsing Netflix’s Gilmore Girls: A Year in Life to top spot in the digital chart (527,175 expressions versus 526,907).

13 Reasons Why is third, followed by Orange is the New Black, The Grand Tour, House of Cards, Black Mirror, The Man in the High Castle, Marvel’s Iron Fist and Stranger Things. 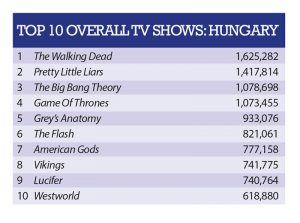 Game of Thrones (1.07 million) charts in fourth, behind The Big Bang Theory, but ahead of Grey’s Anatomy, The Flash, American Gods, Vikings, Lucifer and Westworld (the latter six took between 933,076 and 618,880 average demands).

The impact of Netflix on the CEE region was among the big talking points at NATPE Europe last week. 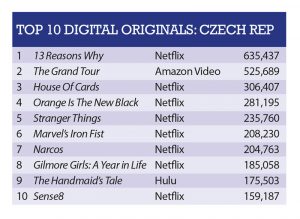 There are wins for 13 Reasons Why and Game of Thrones in the Czech Republic.

On the digital front, 13 Reasons is significantly ahead of The Grand Tour (635,437 vs 525,689) and commands almost double the demand of House of Cards (despite the latter having the momentum of new episodes launching on May 30). 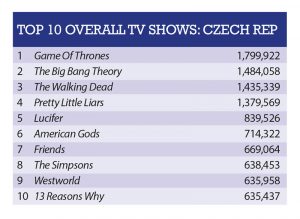 In the overall chart, there is clear water between Game of Thrones (1.8 million), The Big Bang Theory (1.48 million) and The Walking Dead (1.44 million) and Pretty Little Liars (1.38 million).

The Simpsons makes an appearance, further highlighting the demand for classic US comedy, while 13 Reasons Why sneaks into the top ten behind Westworld.

More unusual tastes have been identified in Ukraine, where a Turkish drama, Muhtesem Yüzyil: Kösem, was the most in-demand series.

The show was around 800,000 demand expressions (13%) ahead of Game of Thrones, which returns on July 16 in the US and day-and-date homes around the world.

American Gods was third, just ahead of Shameless and Vikings in third and fourth.

The Walking Dead Dead was down in sixth, with America’s Got Talent in sixth highlighting a propensity for US reality TV.

In the digital charts, another British sci-fi-influenced series, Black Mirror, was top, just ahead of House of Cards.

While series such as 13 Reasons Why, Orange is the New Black, Stranger Things and Gilmore Girls make another appearance, The Last Kingdom (third), Frontier (ninth) and 11.22.63 (tenth) give the chart a different flavour.

There’s a similar pattern in Romania, where 13 Reasons Why and Game of Thrones rule the roost.

Spots four to ten brought in demand expressions of between 344,795 and 214,111 daily. The Handmaid’s Tale took another ninth place.

Overall, Game of Thrones dominates Romania with 2.94 million average demands, though it is pushed hard by Lucifer, which was just behind with 2.88 million.

The Walking Dead was a little further back (2.46 million), slightly ahead of Pretty Little Liars (2.24 million). Prison Break also managed to pass the two million barrier.

Behind those were Grey’s Anatomy, 13 Reasons Why (its highest overall finish), The Big Bang Theory, Supernatural and The Vampire Diaries.

The smallest of our polled territories, Croatia, reveals unique results.

Amazon series The Grand Tour takes its only win in our charts by outstripping 13 Reasons Why and taking top spot in the digital chart.

Behind 13 Reasons is The Handmaid’s Tale, which has been one of this year’s most critically acclaimed new dramas.

Parrot noted the seventh season conclusion of Pretty Little Liars pushed the series to the top of the overall chart; its 575,080 average demands ahead of Prison Break (529,748) and The Big Bang Theory (496,514).

With The Vampire Diaries, The Walking Dead and Grey’s Anatomy taking spots four to six, Game of Thrones can only manage seventh place; it’s lowest finish in our charts this week.

Lucifer then comes in ahead of Friends, with the older-skewing NCIS making its only appearance in tenth.