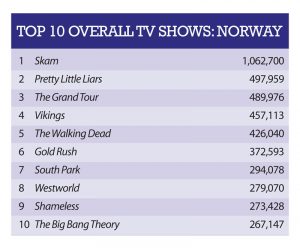 The in-house NRK drama, originally produced for the pubcaster’s web platforms and for teenage girls, suddenly became a worldwide sensation after building the brand on linear channels, with national newspapers around the world writing column inches on it throughout 2016.

That was compounded by Simon Fuller’s XIX Entertainment picking up remake rights for an English-language US version in December.

For the purposes of our latest in-demand chart, data provider Parrot Analytics has classed Skam as an original TV series, making it by far the in-demand series in Norway last week with 1.06 million daily demand expressions.

This was more than double the number of the second place series, Pretty Little Liars, and nearly 750,000 more than the lowest-placed show in the chart, The Big Bang Theory.

Unusually, Game of Thrones does not place in the overall chart, while The Walking Dead is fifth with just over 425,000 demands on average. Westworld charts in eighth, while Vikings, Gold Rush, South Park and Shameless are also popular in Norway.

Demand expression for original series far outstrips that for digital originals, apart from the digital winner, The Grand Tour.

The Amazon Video original rated surprisingly lowly in our 2016 European charts – though that could be because it debuted relatively late in the year. 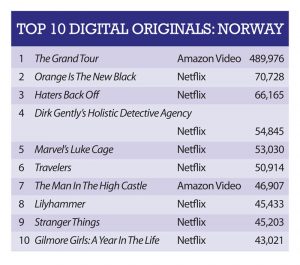 he Jeremy Clarkson-fronted petrolhead series, currently debuting episodes weekly on Amazon around the world, took 489,976 average demands, almost six times that of the second-place Orange is the New Black (70,728) and third-place Haters Back Off (66,165).

As per usual, Netflix dominated the digital chart, with eight of the top ten series. These include Marvel’s Luke Cage, Travelers, Stranger Things and Gilmore Girls: A Year in the Life. Amazon’s other effort, The Man in the High Castle, took seventh place.

Another Netflix series, the eighth-placed Lilyhammer, highlights a taste for local, original production.

The series, distributed internationally by Red Arrow International, was the first original series Netflix ever commissioned, back in 2012. Starring Steve van Zandt, it is set in snowy Norway and comes from local prodco Rubicon.