TBI Tech & Analysis: Why TV will trump cinema for post-pandemic US audiences 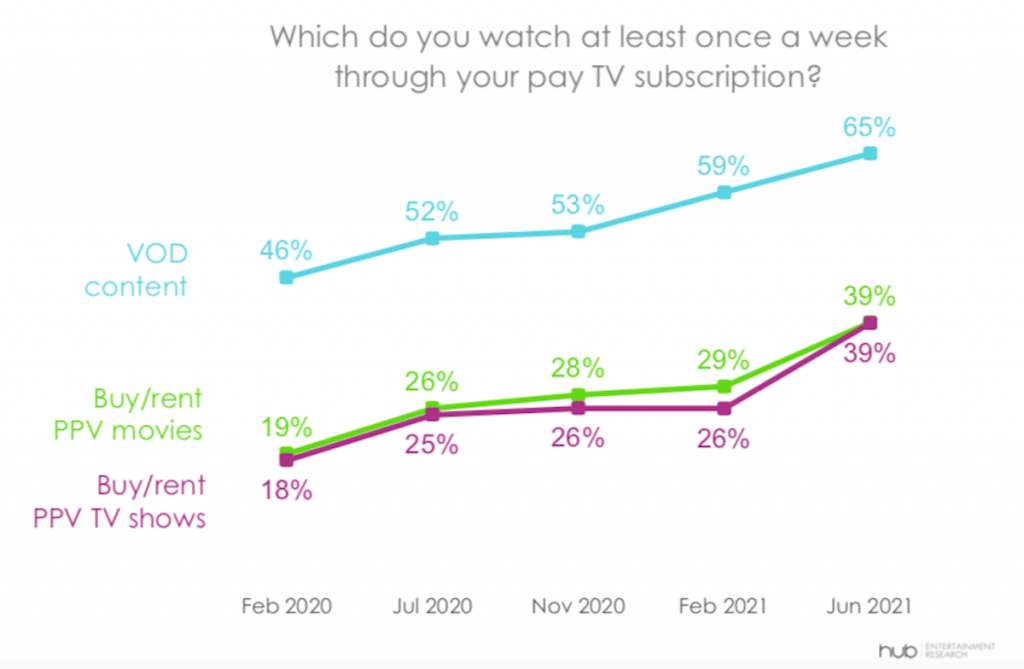 The global pandemic has caused monumental shifts in both the way that audiences are served and consume content with few signs of bouncing back to the ‘old normal’.

From the accelerated rise of new global streaming services to the emerging switch to day-and-date PVOD models, however short-term those strategies may be, the landscape is clearly changing.

But some of these changes may be with us for the forseeable future, as new data from US-based analysis firm Hub Entertainment Research highlights just why North American audiences are more likely to switch on their TVs rather than travel to the cinema, even in a post-pandemic world.

Hub’s research found that the pandemic has – understandably – driven a higher usage of VOD and pay-per-view content among pay-TV customers, with two-thirds of subscribers, surveyed in June 2021, stating that they watched free VOD with their subscription at least once a week – up from less than half in pre-pandemic February 2020.

At the same time, the number of customers who bought or rented programming or movie content at least once per week via their pay-TV provider doubled during this period. 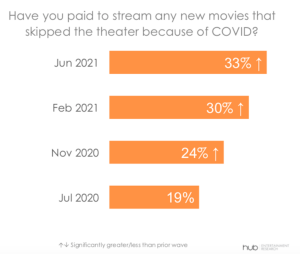 With the majority of movie theatres closed down as a result of the pandemic, and consumers having more time to fill, viewership of premium VOD theatrical productions that were still in cinemas rose considerably.

Only a fifth of respondents to Hub’s survey in July 2020 said they had paid to stream a movie that skipped the cinema because of Covid, but by June 2021, this figure had risen to a third.

Concern about Covid infection and social distancing was not the only reason for this changing behaviour, however, with another being that viewers now have access to better equipment at home – both for watching movies, but also for accessing them. 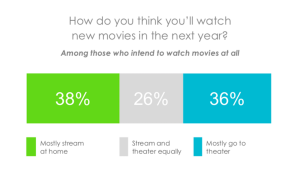 Hub reported that of their movie-going respondents, about two-thirds expected streaming at home to become a regular part of their consumption of new feature content.

Among those who intend to watch new movies in the next year, an equal number say they intend to mostly stream at home (38%) as say they’ll mostly go to the cinema (36%), while about a quarter (26%) intend to use both equally.

“Before the pandemic, more viewers were already paying a premium to watch new movies at home,” commented Jon Giegengack, principal at Hub and one of the study authors.  “HBO Max and Disney poured more gas on the fire by redefining the release window for new movies.

“Add in the fact that many upgraded their home viewing tech during the pandemic, and we have perfect conditions for driving consumption of PVOD even after anxiety about theaters has faded completely.”

The data above is taken from the fourth edition of Hub Entertainment Research’s Predicting The Pandemic study, which was conducted among 3,000 US consumers age 14-74, who watch at least one hour of TV per week, between 22 June to 29 June 2021.