The number of SVOD homes in the main Eastern Europe countries will rocket to 18.2 million by 2021, a huge increase from the 5.6 million expected at the end of this year.

The forecasts come from Digital TV Research, which added that, by territory, Russia will lead the way. 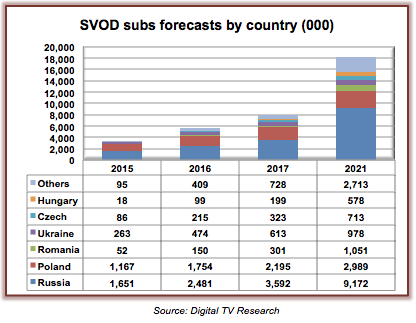 The country accounted for 44% of the region’s SVOD subs this year, and will take half of the 2021 total, Digital TV Research said.

By platform Netflix will lead the way with an estimated 3.5 million subs. Russia’s Ivi will rank second with 2.4 million paying customers, ahead of Russian and Ukrainian service Megogo with 1.3 million, and Russia-specific Okko with 1.1 million.

Beyond Russia, the most popular country-specific service by 2021 will be Poland’s Ipla with 0.9 million.

Netflix will be market leader but will find growth hampered by pricing, content and payment problems.

“Netflix launched across the region in January 2016, with some success,’ said Simon Murray, principal analyst at Digital TV Research. “Many, however, consider the platform to be expensive. Netflix requires customers to pay with credit cards and in dollars or Euros, despite low levels of credit card ownership in Eastern Europe. Furthermore, most of Netflix’s content is in English, with little local fare.”

He added that Netflix had few distribution deals with regional pay TV players at launch, but that its strategy has changed. “The company adapted its strategy during 2016,” he said. “It now has non-exclusive distribution agreements with Liberty Global (owner of the UPC cable networks in Czech Republic, Hungary, Poland, Romania and Slovakia) and Telia (active in the Baltic States).”