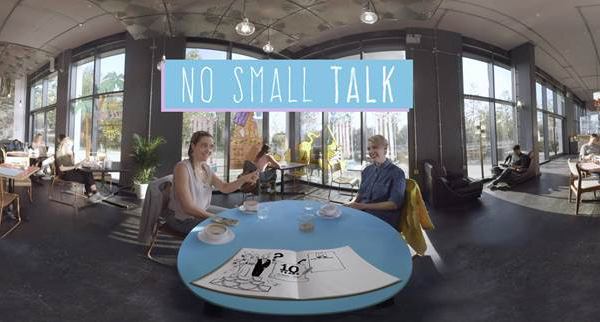 The show is being coproduced by VR production company VR City and immersive content specialist Lyristic.

The programme will be available as a 360-degree video on the low-cost Google Cardboard viewer and the Samsung Gear VR headset.

The producers said they deliberately targeted young female viewers as research out of the US shows male usage of virtual reality is double that of women, who are underserved in terms of dedicated VR content.

The show will feature TV presenter Cherry Healey and presenter and blogger Emma Gannon, as they discuss daily life and the issues of the day.

The BBC has launched the show on BBC Taster, its platform for VR and other emerging forms of content.

“We had a clear goal to try and create a VR format that felt immersive, unique and fulfilled the challenge of delivering a vibrant editorial that was intimate, surprising and accessible to women,” said VR City’s Darren Emmerson.

“We wanted to ensure that the viewer felt part of the conversation but we also wanted to devise tools to enhance the experience beyond just having a seat at the table. The combination of the narrative, environment, camera positioning and visual effects all work together to deliver a unique experience that we believe offers the audience something different and compelling.”

Catherine Allen of Lyristic said: “We set out to use the power of virtual reality to scale the magic of conversation;inspiring our audience to get together with friends, put down their smartphones and have their own small-talk-free conversations.”

Chris Sizemore, executive editor, knowledge and learning at the BBC commissioned the ten-minute show. “The vision for this piece of content format innovation is to connect ‘Generation Podcast’ with an emerging new media technology: 360 video and VR headsets,” he said.

“The experience offers this audience the chance to sit in on Cherry and Emma’s conversation with a sense of intimacy, to feel like they are present and taking part, not just observing from a distance or ‘through a window’.”