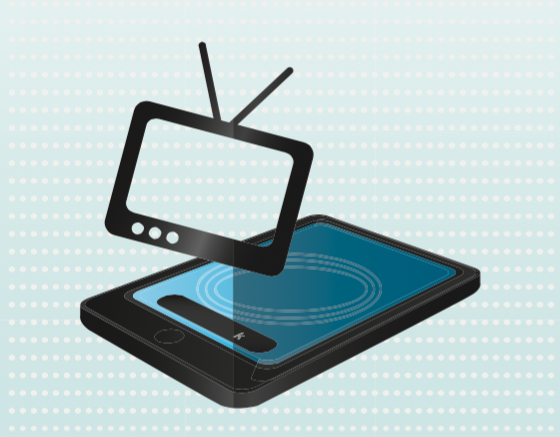 Telecoms operators are increasingly looking to TV to drive new subs, increase customer loyalty and create a new revenue stream. Mark Newman, consultant and former chief research officer at Ovum, looks at which operator is doing what and where… and why.

Hong Kong’s PCCW is beginning to feel more like a television company than a telecoms operator. When it was invited to speak at the Goldman Sachs Technet conference in April it was to talk specifically about its burgeoning media business rather than its broader telecoms activities. And while PCCW may be an extreme example – gaining access to China fundamentally changes the dynamics of operating a TV business in a market as small as Hong Kong – its enthusiasm for expansion is just one example of a global stampede by telcos into the pay TV business.

While the telecoms business is flat – the fizz went out of the mobile industry some time ago and fixed broadband remains competitive and capital intensive – TV is a relatively young and relatively fast-growing line of business for those operators around the world that have a legacy in retail broadband.

The larger European operators all announced strong growth in their TV business in the first quarter of 2016. Telefonica recorded a 7% increase to its total number of TV customers. Orange’s base of TV users grew by 10% to 8.2 million and Deutsche Telekom had 2.7 million customers on its Entertain TV service at the end of March, up 8.7% year on year. These three groups have all had pay TV offerings in their domestic markets for several years, but they are also now launching TV services as part of a retail broadband offering in those markets where, until recently, their focus was exclusively mobile.

Even Vodafone which, for many years was a pure wireless business, is participating. “Television and content are becoming increasingly important parts of our offering… we have 9.5 million TV customers, with 400,0000 added this year,” the company said in its annual report.

A number of different options are available for telecoms operators to expand into the TV business and the last three years have seen a wave of M&A activity.

Vodafone moved away from its pure-play mobile focus by acquiring cable TV operators in Germany (Kabel Deutschland) and Spain (Ono). Its New Zealand business is currently merging with Sky Television Network. In 2014, Telefonica bought satellite broadcaster Canal+ in Spain and in the same year US giant AT&T announced the US$67 billion acquisition of American pay TV platform DirecTV.

Joint venturing represents another approach. Australian telco Telstra owns 50% of cable TV and satellite operator Foxtel while, Bezeq, an Israeli telecoms operator, owns 49.8% of satellite TV operator Yes and has won approval for a full takeover of the company.

Other operators have started to develop their own brands and content. PCCW is a prime example. It has access to mainland China TV production companies and has built a business selling Chinese content to other telecoms operators. More recently, BT in the UK successfully launched its own BT Sports service after investing heavily in Premier League football rights. 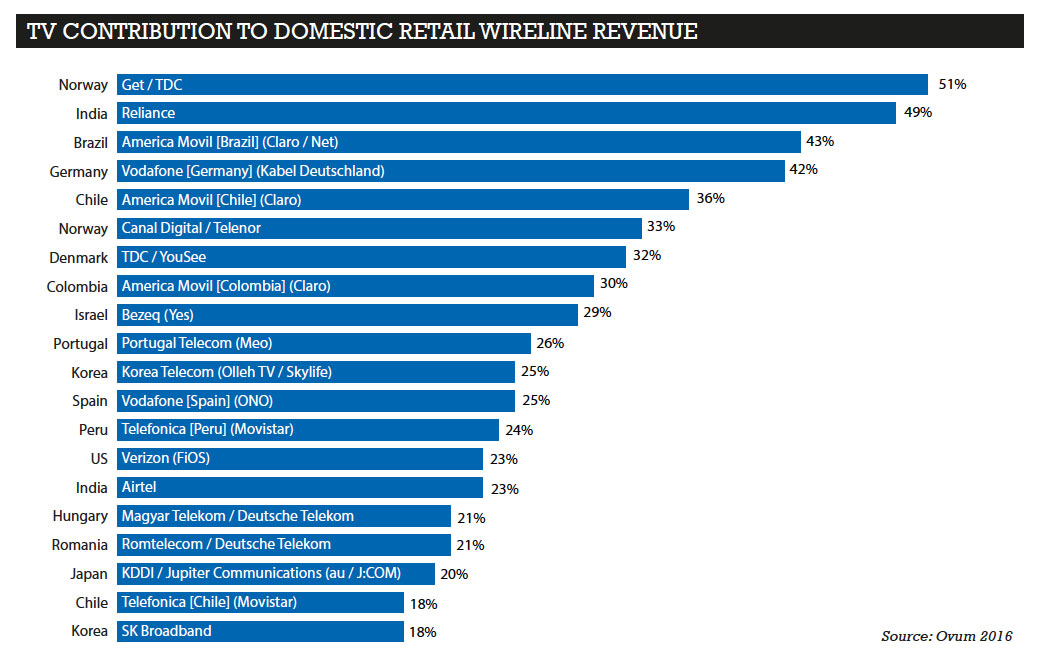 While many operators report their TV revenues, very few produce regular data on the profitability of their television services. The real driver for TV is the ability to offer multi-play services and drive greater customer loyalty.

Danish telecoms operator TDC says that churn for customers who only take one service is 21% per year; for customers who take two services churn is 16%; and for those who take three services 13%. However, among those people who buy four services (triple-play plus mobile), churn is just 11%. The benefits of offering multi-play services are even more striking at Belgian operator Belgacom, where churn levels go from 20.8% for single-play customers to just 2.8% for quad-play users.

Such comparisons between the churn rates of different types of customers give operators a clear mandate to invest in TV services. Bidding for sports rights has been a focus for many operators, but results have been mixed. In the UK, BT’s success in securing Premier League rights has given a big boost to the company’s retail broadband business. BT’s high-speed broadband customers get access to the content for free and monetisation largely comes from Sky and Virgin customers.

Other large operator groups, including Orange and Deutsche Telekom, have won rights to broadcast their own national football leagues in the past, but do not currently own the rights. Deutsche Telekom has scaled back its TV ambitions since losing Bundesliga rights. Its strategy is now based around reselling the Sky service rather than competing with it.

Beyond sports rights, only a handful of operators have clear strategies for investing in their own programming. Those that do have little appetite for increasing levels of investment.

French telco Orange has, in the past, been one of the most enthusiastic investors in the media business. In 2008, it launched Orange Cinema Series, a dedicated set of channels, films and television series for its DTH service. While the service still exists today, it may not figure prominently in the company’s future TV strategy.

Orange still operates Orange Studio, a subsidiary that coproduces and acquires French-language films. Orange Studio managing director David Kessler has said that its budget fell from €45 million (US$51 million) in its early years to €20 million in 2015, evenly divided between film production and rights acquisition. The business was loss-making, he added, but his hope was that it would become profitable.

Telefonica is another operator investing in film. In 2013, it set up Telefonica Studios to cluster the group’s various production activities in Europe and Latin America under one umbrella. Its strategy has been to forge partnerships with local producers. The firm achieved its three-year plan of investing in more than 20 films in year one. So far it has sold 21 million cinema tickets to its own customers.

Those operators that have large or international footprints are more likely to invest heavily in programming than ones that have modest domestic market and lack expertise in reselling programming rights.

In recent years, Telefonica’s expansion strategy has focused on Latin America rather than Europe, and much of Telefonica Studios’ growth takes place there, though new original programming investment has gone to SVOD platform Movistar Plus in Spain.

With its acquisition of DirecTV, AT&T launched itself into first place in the US pay TV market, gaining the ability to bundle TV with its existing services nationwide and positioning itself to better compete with cable rivals such as Comcast and Time Warner Cable. Owning DirecTV gives AT&T exclusive content, enabling it to compete with the likes of HBO.

Telecoms operators’ TV strategies will increasingly be driven by multiplay and TV Everywhere. There is growing interest in creating mobile-centric content, although there are few good examples of mobile-first services. In Latin America the smartphone is the default screen for accessing content, so for AT&T – which operates Mexico’s second mobile network – mobility needs to sit front and centre of its programming strategy.

AT&T’s main US rival, Verizon, has embarked on a mobile-centric strategy with the launch of its Go90 mobile TV service and app. It has already signed up a number of content partners for Go90 including Viacom, Discovery Communications and New Form Digital, but  in recent weeks there have been efforts to dampen expectations. Verizon CFO Fran Schammo reminded investors in April that “we are still in the very early stages of gaining traction and engagement”, while adding that Verizon remained “encouraged by the viewership”.

Pay TV is one of the few success stories for telecoms operators in the consumer market. In their core connectivity businesses, operators have seen massive growth in fixed and mobile broadband adoption and traffic, but this has not generated incremental revenues. Data growth has barely compensated for the decline in revenues from voice and SMS. Their TV businesses and strategies are, however, still relatively immature. 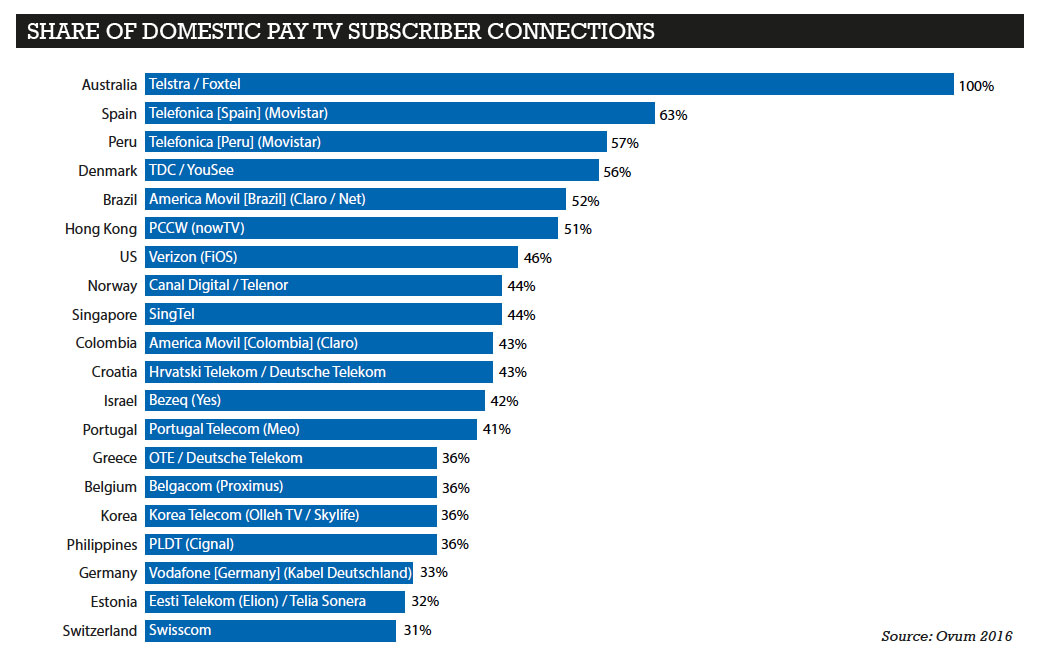 For the time being many operators are happy to base their strategies on distributing rival pay TV packages or over-the-top services such as Netflix – even if they are making little or no profit from these deal – because it helps to drive loyalty among their customer base. For an operator with a  customer base of ten million broadband users, a reduction in annual churn from 10% to 5% on a customer base generating an average of US$50 per month would increase revenues by US$300 million.

Where reselling a rival service is not a viable option, securing high value sports rights remains the preferred strategy for telecoms operators.

However, this is driving up prices. Orange CEO Stephane Richard referred to the growing challenges of bidding for sports rights during the company’s most recent results presentation. “The landscape is moving with new players coming into the game,” he said. “Sports rights are becoming more expensive and competitive. We are very pragmatic. Our main concern is to secure the sourcing of critical content for our customers [even if] we have to put more money into content to reach this target.”