What is the most important change in the way that scripted projects are financed?

It used to be so simple: “In the past there was basically one path to creating a series: to develop a script and shoot a pilot, and then hope the pilot would be ordered to series by a network,” says Carrie Stein, executive VP, global productions at Entertainment One. “Today, there are a number of ways to finance a series and many of those paths no longer rely as heavily on pilots or on a single domestic US buyer.”

As budgets and the volume of drama ordered increase, so does the complexity of financing a project, and the array of options available to both buyers and sellers. It is clear that that from film finance models, coproduction, greater deficits to an array of new buyers, content companies have a greater range of options than ever in terms of getting a show made.

Within that changing landscape the role of the distributor is changing. “There are now as many models and solutions available as there are types of scripted shows,” says About Premium Content’s Emmanuelle Guilbart.

“The role of distribution has increased significantly as there are more opportunities for primetime shows with international potential. As with feature films a few decades ago, we are observing a massive transfer of risk from the creators [producers and broadcasters] toward distributors.

“Distributors are asked to bank on the show’s international potential, and it has become their core expertise to know how to manage this risk carefully.”

Stuart Baxter, president, eOne Television International, underlines the point that sales houses are taking on more of the financial burden and risk. “With so many new commissioners participating, most will only part-finance a show – so the distribution community is carrying much of the risk on a much broader and larger drama slate,” he says.

After a wave of consolidation, the biggest distribution firms can now offer a greater proportion of a budget upfront than ever before, and “distributors are putting up larger distribution advances, and becoming coproduction and development partners on projects,” says Zodiak Rights’ drama boss, Caroline Torrance.

Another option is to pursue a film finance route; as movie talent migrates to TV, the television business is clearly appropriating some of the financing models see in the features world.

Also reminiscent of the film business, and much-reference by execs, is the increasing availability of, and reliance upon, tax breaks.

“This very much depends on the country of origin, but tax breaks in the UK have made a big difference,” says Lilla Hurst, co-MD of consultancy Drive and UK broadcaster Channel 5’s former copros boss. “There is also far more coproduction occurring in this genre than seen before.”

In the UK, the tax relief for high-end drama has been broadly welcomed since its introduction in April 2013, although it has also meant drama has become more expensive to make.

What is the single most important change in the way that scripted projects are financed? “The proliferation of tax credits, which has caused more money to be available, but also price inflation,” says Maartje Horchner, head of acquisitions, All3Media International. “This has inadvertently spawned the coproduction market.” 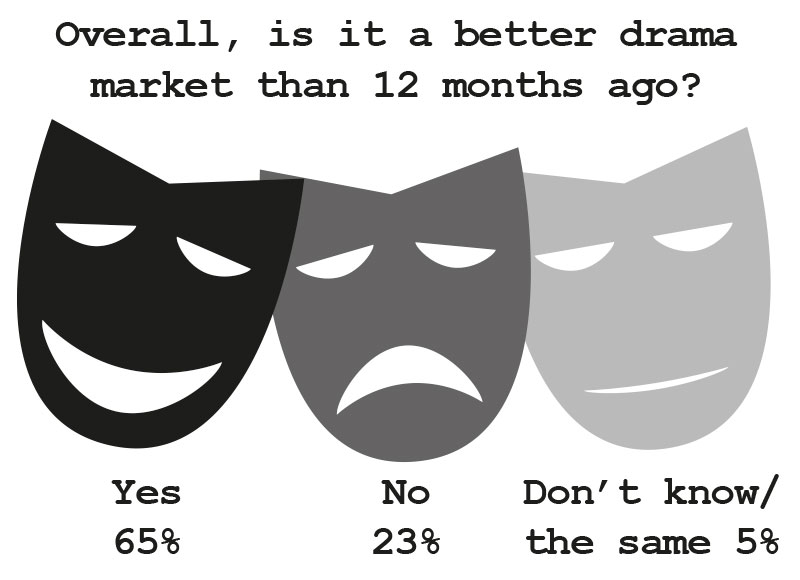 The sheer scale (and cost) of many contemporary drama, as well as the availability of local tax incentives, have also driven coproduction to a new level.

For Federation Entertainment founder Pascal Breton, it comes down to dollars and cents (and Euros and cents or pounds and pennies).

“There’s been an increase in coproductions, because broadcasters can no longer produce alone all the series they need,” the France-based exec says.

The move to coproduction clearly affects the creative process, as broadcasters readily admit. “There are a lot of projects that are too expensive for one company to produce – so you need to find partners – this influences the story of course,” says Karni Ziv, head of the drama and comedy department at Keshet Media Group.

“It needs to be a story in which the core is touches on universal themes, like The A Word, which touches the basic fears and hopes of families all over the world.”

The actual proportion the commissioning broadcaster can fund is often shrinking as programme budgets increase in size faster than pots of commissioning money.

“The demand for drama has never been greater, but it’s also never been more difficult to finance,” says Dynamic Television’s Dan March. “Broadcasters outside of the US cannot finance 50% of a budget at this level, which means producers must find other broadcast partners to support such a project, hence the frenzy around coproductions.”

The traditional broadcasters’ shrinking budgets are driving the copro activity and partners increasingly want to get involved early in a hyper-competitive drama market.

“Budgets decreasing within broadcasters which ensures a strong need for coproduction, this isn’t new however, but the financing is put together much earlier,” says FremantleMedia’s executive VP, global scripted and factual Georgia Brown. She adds that Fremantle is “funding scripts and treatments to be able to secure rights and financing later in the process”.

There is also a greater buy-in from the US in term of copro and international drama, adds Sarah Tong, sales chief at UK-based Hat Trick International. “Big buyers such as US broadcasters and digital platforms are now not just looking at US content, but happy to look further afield for coproductions, presales and even straight commissions,” she says.

Maria Cervera, head of international coproductions at Spanish prodco Plano a Plano, adds: “International distributors are aggressively betting on quality content, no matter where it comes from.”

As with everything in the current TV world, the spectre of SVOD, and specifically Netflix, looms large. Although what SVOD gives with one hand it arguably is starting to take with the other, in terms of rights.

Keren Sahar, managing director, distribution, at Keshet International, says: “The OTT services with very deep pockets are able to fully finance a production; this comes at price, of course, because then there is no real back-end revenue coming in to the producer from distribution of the series as the platform takes worldwide rights.”

“The appearance of global actors in the market such as Netflix or Amazon as well as the internationalisation of groups who need to get premium content to satisfy their subscribers” is a new challenge, says Javier Méndez, head of content at Spanish giant Mediapro. “They are ready to fully finance these kind of projects.”

ITV Studios Global Entertainment executive VP Ruth Clarke and Dramacorp founder Patrick Nebout, meanwhile, sum up the thoughts of many, suggesting the new financing models are about flexibility and embracing a variety of different options, depending on the project.

“There is no room for pre-prescribed funding models anymore. Expectations are higher, budgets more ambitious and networks often unable to fully fund a commission – getting a show from paper to screen requires ever more creative funding models,” Clarke says. “There is simply no one-size-fits-all model.”

For Nebout, “anything goes”. He says: “The most important change is that suddenly, all financing models are possible. Every project has its own financing set-up.”