Release windows for drama programming are shortening dramatically in key territories, with a ‘pronounced change’ in the time between US shows airing domestically and hitting international channels, new data shows.

Research house IHS Technology has analysed the release patterns of US series in international markets.

“Research clearly indicates that ‘the Netflix effect’ – the policy of the streaming service to launch its originals simultaneously across all of its territories – has transformed the TV distribution business over the last couple of years,” IHS said.

The research house noted that across the UK, Australia, France and Germany windows are being compressed.

The biggest year-on-year change was in France where the average window from US release is now 32 days, compared with 159 days in 2014/15. 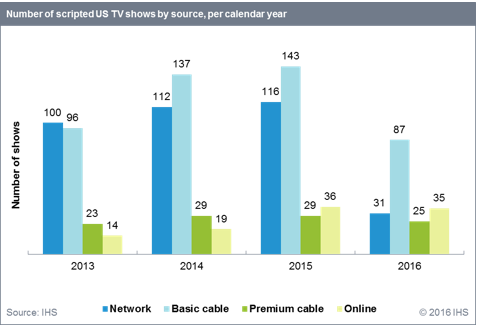 There is, however, a ‘two speed’ distribution model in France, whereby US series are moving rapidly to OTT and premium pay, but more slowly to free-TV.

In the UK and Australia the window is now 37 days, compared with 120 days across the same period. IHS noted that in the UK, US series are much more likely to be on pay TV than free, and pay providers are more likely to compress windows.

Underling the point, Sky Atlantic last night simulcast the opening episode of season six of Game of Thrones with HBO in the US.

Almost half of all UK acquisitions of US programming were made by pay TV operators and channels last year, with 34% going to OTT and just 17% free-to-air.

In Germany the change was less dramatic, but still shortened year-on-year. It is now 61 days against 170 a TV season earlier.